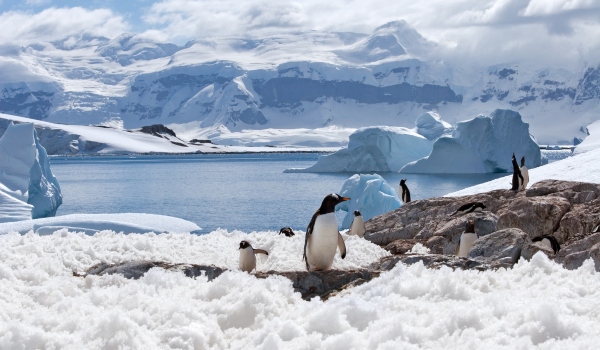 LONDON – The Arctic may be shrinking as the world warms but Antarctic sea ice is expanding. Blame global warming for that, too, say Dutch scientists.

The paradox is that increasing temperatures have set in motion a chain of events in the southern seas that have the opposite effect. Engineers call this negative feedback. So do Richard Bintanja and colleagues of the Royal Netherlands Meteorological Institute.

They report in Nature Geoscience that as the Antarctic ice shelves melt, the resulting cool fresh water has actually served to insulate the offshore sea ice from the warming ocean beneath the floating floes. So, as a consequence, in 2010 southern ocean sea ice reached a record extent.

The Arctic Ocean is mostly just that: ocean, which is getting warmer, and the northernmost parts of the globe have been warming at twice the global average rate.

So the north polar sea ice has been steadily thinning in depth and shrinking in area for more than 30 years. Ice reflects sunlight and keeps itself cold. Dark seas absorb sunlight and continue to get warmer.

As the Arctic ice shrinks, the feedback becomes positive. So the expectation is that sometime this century, in late summer, the Arctic ocean will for a few weeks be ice-free.

But Antarctica is an enormous, high continental landmass covered almost entirely by a huge depth of ice and snow, and it keeps itself cold very effectively. The oceans as a whole are warming – but in Antarctica, this warming has a counter-intuitive effect: thanks to the melt water, the total area of reflective sea ice is stable, or getting larger.

So although warm water is reaching the continental shelves, and creating some melting, the overall effect is to deliver a cold freshwater layer to the top hundred metres or so of the surrounding ocean. Fresh water freezes more quickly, so sea ice builds up quickly in the autumn and early winter.

“Our analyses indicate that the overall sea-ice trend is dominated by increased ice-shelf melt”, the Dutch scientists report. “We suggest that cool sea surface temperatures around Antarctica could offset projected snowfall increases in Antarctica, with implications for estimates of future sea-level rise.”

That should be good news: there is enough ice on the southern continent to completely inundate most of the world’s great estuarine and sea level cities. But the conclusions are tentative and not everybody is likely to agree.

Is this an effect that will last? The interaction of ocean and atmosphere is a complicated one, with a number of factors at work that influence the growth of sea ice. In the UK, Martin Siegert of the University of Bristol suspects that the process just described may not be significant in the long run.

Paul Holland of the British Antarctic Survey calls the freshwater concept “plausible” but thinks there are also plausible alternative explanations for the increase in sea ice around Antarctica, among them changes in the wind patterns that might deliver blasts of colder air to the surrounding seas.

And Andrew Russell of Brunel University agrees: he sees both wind pattern changes and ice shelf melting resulting in increased sea ice “which perhaps isn’t what you’d expect but is consistent with our best description of climate change.”

Meanwhile, scientists at the American Museum of Natural History have more bad news for polar bears and other creatures adapted to the frozen Arctic. It will get warmer, and greener.

Rising temperatures in the next few decades will lead to a “massive” increase in vegetation in the lands bordering the Arctic, with as much as 50% more tree cover.

Three weeks ago, an international team reported in Nature Climate Change that vegetation conditions had advanced hundreds of miles north in the last few decades.

Now a consortium of researchers from the New York museum, Woods Hole research centre, Cornell University and the University of York in the UK report in the same journal that the growth will continue.

They used climate models to simulate future conditions and they believe that positive feedback will guarantee the advance of mosses, dwarf shrubs, sedges, grasses and even trees towards the pole. As the ice and snow give way to green foliage, the rate of warming will step up.

“These impacts would extend far beyond the Arctic region,” said Richard Pearson of the American Natural History Museum. “For example some species of birds seasonally migrate from lower latitudes and rely on finding particular polar habitats, such as open space for ground nesting.” – Climate News Network