The eruption almost three years ago of an icelandic volcano added IRON to the seas south of the island. But it disappointed hopes that it would help a natural process to remove much carbon dioxide from the atmosphere. 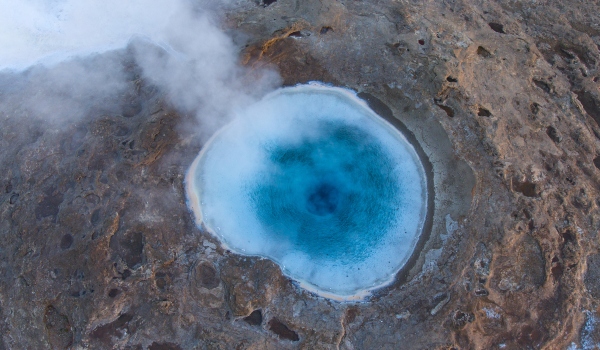 LONDON– Plankton, tiny marine organisms, are a good way of cleansing the atmosphere of one of the main greenhouse gases, carbon dioxide. To do this they need dissolved iron to help them to grow, and if they lack iron then they cannot do much to reduce CO2 levels.

So the eruption in 2010 of an Icelandic volcano gave scientists a perfect opportunity to see how much the cataclysm helped the plankton by showering them with unexpected clouds of iron.

Their verdict, published in the journal Geophysical Research Letters – the volcano certainly helped, but not for long enough to make much difference.

This is a blow to some supporters of geo-engineering, who have suggested that one way to tackle climate change is large-scale seeding of the oceans with iron to stimulate plankton to absorb more carbon dioxide (see our 14 March story, Who will regulate the researchers?).

The volcano’s impact was assessed by a team led by scientists from the UK’s National Oceanography Centre, Southampton, who were on a shipboard research expedition in the area at the time.

When it erupted in April 2010 the volcano, Eyjafjallajökull, hurled clouds of ash several kilometres into the atmosphere, bringing air travel to a standstill across Europe and, in a less noticeable effect, seeding the seas south of Iceland with ash.

In many parts of the ocean the productivity of phytoplankton – microscopic plants at the base of the marine food chain – is limited by the availability of dissolved iron.

In 2007 the team had shown that, after a large spring bloom, phytoplankton in the Iceland Basin failed to grow much because it lacked iron. The scientists wanted to see whether the ash from Eyjafjallajökull supplied enough iron to sustain the spring blooms for longer than usual.

The team – from Southampton, the University of Cape Town and the Norwegian Institute for Air Research – conducted three research voyages in 2010 investigating ocean productivity in the area affected by ash from Eyjafjallajökull.

They took samples of ash and dust in the atmosphere, and of nutrients in the ocean, and also measured the activity of the phytoplankton.

The chief scientist for the summer research cruise and lead author of the Geophysical Research Letters paper, Professor Eric Achterberg, said: “The high latitude North Atlantic ocean is a globally important ocean region, as it is a sink for atmospheric carbon dioxide, and an area where deep water formation takes place.

“A limit to the availability of iron in this region means that the ocean is less efficient in its uptake of atmospheric carbon dioxide.”

The team found that the five-week eruption supplied dissolved iron to a region of the North Atlantic of up 570,000 square kilometres, increasing the number of phytoplankton cells.

Biological experiments showed that the ash did release the iron which the phytoplankton needed to stimulate their growth. But the effect was short-lived as the extra iron resulted in the rapid removal of biological nitrate, depriving the phytoplankton of the nitrogen which they also needed, a caveat to proponents of this form of geo-engineering.

Professor Achterberg said: “The additional removal of carbon by the ash-stimulated phytoplankton was therefore only 15 to 20% higher than in other years, making for a significant but short-lived change to the biogeochemistry of the Iceland Basin.”

The National Oceanography Centre develops technology for coastal and deep ocean research. It is based in Southampton and Liverpool. – Climate News Network