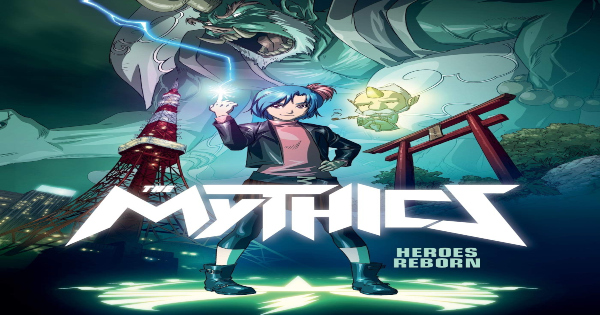 A powerful foe has returned in ‘The Mythics: Heroes Reborn’

I always have a great time reading a good superhero story. When I heard about The Mythics: Heroes Reborn I was looking forward to reading it. I was able to get a digital copy of this graphic novel and here is what I thought of it.

You can read the plot for The Mythics Heroes Reborn here:

An ancient evil has returned to earth after being banished for millennia. Now, the old gods who thought they had defeated evil must now find new young protectors of earth. Six children from all over the world are chosen.

The god of lightning, Raijin, instills his powers in Yuko, a Japanese schoolgirl in a rock band. Yuko must learn to wield her newfound powers of electricity to defeat Fuijin, the evil god of wind before he destroys all of Japan.

Meanwhile, in Egypt, young Amir, a recently orphaned boy taking over his father’s successful company and landholdings, encounters Horus, the Sun and Moon god. Horus and Amir must stop Evil in the form of Seth from reanimating all the dead mummies and taking over the world.

Lastly, a young opera hopeful, Abigail, must face a blizzard freezing all of Germany orchestrated by Loki, the god of mischief. Under the guidance of Freya, the Norse god of beauty, Abigail must learn to
find her voice and her mythic weapon to stop evil in its tracks.

These children, and three more yet to come, are Earth’s last hope in the war against Evil. Using their powers and strengths, they might just have what it takes to be the new gods of today.

I had a great time reading this graphic novel. Each story ended up being better than the one before it. This ancient evil was strong, and taking it down was never an easy task. Yet as this story comes to a close, it looks like this threat is neutralized, at least for now.

The Mythics: Heroes Reborn is available now. You can order this graphic novel on Amazon and at Barnes and Noble.