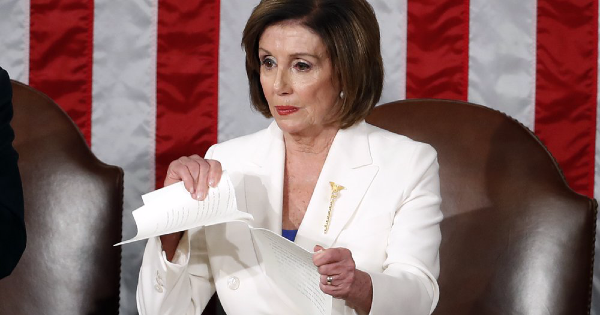 Are you into personal presence, and energetic manifestation? Do you believe that it’s time for humanity to evolve? Maybe you’re into ancient ceremony. You come back feeling alive and held, unified with your brothers and sisters, with the Earth and the stars. Maybe you eat organic and sustainably harvested, and feel better when you do so because it feels like you’re honoring the life it takes to sustain your own. Short of this, maybe you practice yoga. If so, do you say, “Namaste,” as part of your practice?

Well, then please remember one thing: what doesn’t unify, divides.

I can understand what Ms. Pelosi did at the end of the State of the Union Address, from her perspective. It’s a matter of empathy and compassion; two things I’ve worked hard on. I can see somewhat through her eyes. Many of us can, politics aside. She’s been through a lot with Trump. And, he’s been through a lot with her. “Bad blood between them” doesn’t begin to describe it.

But that act was one of literal division.

I’m not defending Trump. Anyone who knows me knows that I am not a fan of what he’s done to this nation, or of who he is on a personal level. In short, the level of division has risen in this country under his watch. I don’t care about anything else as much. The answer to the question, “Are you a Unifier?” is pretty much it for me these days.

Why? Because division is cancer for any group of people, including nations. The end game is the destruction of the entity.

Think of a group of people lost in the wilderness. Say there are two leaders that each have many, but not all, the skills that are needed for survival. But they can’t get along. Their personal schisms get increasingly intense.

What is the end game of this scenario?

There can be many, from strangling tension to outright murder. Short of stumbling into civilization, the only thing that will save this group is to resolve the tension as much as possible. If I were watching this drama unfold in the wilderness from the third person, I would hope that, short of the leaders resolving to stand together, the individual members would find ways to bring the energy from division to unification.

I would hope they would use all the tools they had to foment peace. A great way to do this would be to find ways to communicate with members of the other side. Competing survivors might do small favors for the other. They might share a bite of food, or a sip of water even as they follow their leaders. In other words, the leaders may be at odds, but the group doesn’t necessarily have to be in every instance. And it doesn’t have to get violent.

A leader taking the words of the other at a community fireside and ripping them up for the whole group to see, is not helpful.

So, if you, like me, see that the greatest problem in this nation is that we are falling apart at seams that have been carefully stitched for centuries, the question isn’t Democrat vs. Republican. It’s not even right vs. wrong. The question is, are you a Unifier, or are you a Divider?

These are the only two parties, now.

Or at least we claim to be.

It’s not easy, when we see injustice. It’s difficult when our people have generational wounds. But this moment is bigger than all of those. If we are Unifiers, and if we’re not addicted to the idea of “being right,” then what grates on us even more than dark, overt actions are the vibrations that come from them. And it’s the vibration of division that is tearing this country apart, as certain as the papers Ms. Pelosi held were.

I was told in no uncertain terms recently to stop commenting publicly on politics. I am no longer to actively follow them. This essay may be breaking that commitment. But I am unable to let these thoughts pass, as prolific as the social media commentary is on this issue this morning.

We are not here to identify with being right. We are not here to constantly look to affirm our beliefs. We are healers. When someone is cut deeply, we’re the ones who put the stitches in, aren’t we? We certainly don’t exacerbate the wound. The first rule of the Hippocratic Oath is, after all, “First, do no harm.”

We need our leaders to do that, as well.

Healers and enlightening ones, shamanic practitioners, yogis and yoginis, evolved men and women… see the darkness. Note it. Certainly respect it. But don’t react to it. Instead, today, do something nice for someone that sees the world differently than you. Consider it a stitch on a wound that needs to close.

This work alone is what will make this nation great.