Prepare for another wild adventure and marvel at some of the amazing bonus features. 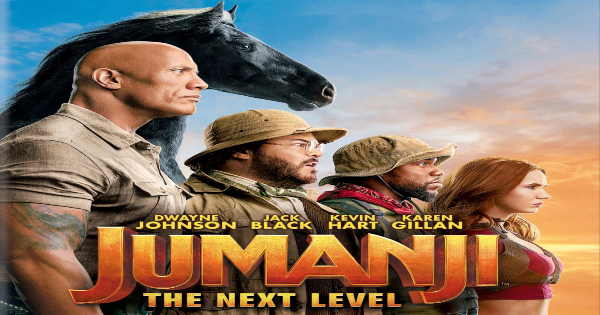 Return to this dangerous place in ‘Jumanji: The Next Level’

I have to say I really enjoyed Jumanji: Welcome to the Jungle. It pushed the cast to new heights, and had them playing characters outside their comfort zone. It also told a great story and expanded on this amazing series. When a sequel got announced I wasn’t surprised at all. Well now Jumanji: The Next Level is coming out on Blu-Ray. I was able to get a review copy and here is what I thought of it.

You can read the plot for Jumanji The Next Level here:

This action packed sequel catches up with Spencer, Fridge, Martha and Bethany three years after their first adventure in Jumanji’s mystical video game world. When Spencer goes missing inside the game ahead of the group’s planned reunion from college, his friends, along with his grandfather and his grandfather’s friend, once again inhabit the avatars of Dr. Bravestone, “Mouse” Finbar, Professor Sheldon Oberon and Ruby Roundhouse to rescue him. As they return to Jumanji, they discover that nothing is as they expect. With more action and surprises, the players will have to brave parts unknown and unexplored, from the arid deserts to the snowy mountains, in order to escape.

This was a very well made sequel. It took viewers to unseen parts of Jumanji, and with it came all kinds of dangers.  ‘Body Swapping: Snapping Into Character’ had the cast and crew talking about how they went about bringing their characters to life. ‘Back Together: Reuniting the Cast’ had the cast talking about how excited they were to make this movie and how they stepped things up for this film. There was also a really funny gag reel. If you liked the last movie, then you won’t want to miss this one.