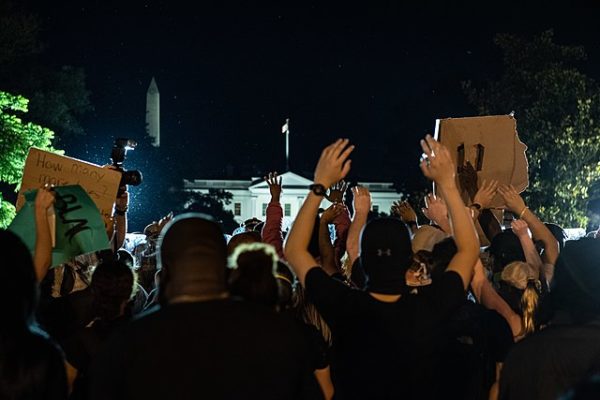 It’s Sunday morning, May 31. I woke up still reeling from last night’s images of great American cities burning, of police officers – American police officers, in the year 2020 – arresting press without cause, firing upon peaceful bystanders standing on their own porch, breaking into an innocent person’s car and tasing them.

My heart is broken, my spirit deflated. My country fractured, my neighbors dying. This heart has been breaking for years – sometimes quietly, sometimes out loud. When there is no action from leaders, people will take matters into their own hands, and here we are. I don’t know where to start, or how to describe my despair. But I figure I don’t really need to. I figure you get it. I figure we’re all in the same boat today.

Little Punks is a bi-weekly parenting column. It’s not an advice column, because who the hell am I? It’s a work-in-progress column. It’s a chronicle of one man’s effort to empower and facilitate his kids’ journey to become the unique weirdos they were meant to be. It’s a post-hipster dad’s “bless this mess.”

Today I have no brilliant words of wisdom or soaring inspiration. (Do I ever?) I’m sure in the coming days and weeks, Good Men Project and dozens of other publications will be littered with expert advice on how to be a responsible parent and raise smart, empathetic, engaged, woke kids. What I have is the work-in-progress. I have the mess.

I found out last night that my 11 year-old gets his news from TikTok. He had written “avenge Jorge [sic] Floyd” and “Black Lives Matter” in his sketchbook. He is growing up faster than I realized, he has news sources I didn’t know existed. He is an individual in the world. He is approaching Tamir Rice’s age, and he is grappling with all of it. He wants vengeance before he even knows what the word “avenge” means.

Childhood innocence is no longer an option. Then again, he was entering kindergarten when Adam Lanza walked into Sandy Hook Elementary. Maybe innocence was never his to enjoy.

Last night, I started by listening. I wanted to find out what my kids knew, to what extent they could grasp the dynamics at work, what their intellectual and emotional responses were. My eight year-old began to cry and tried to hide it, so we talked about that. I said it’s okay to cry. I said I cry too. I said crying is the right response, to be honest.

Here’s what I know. I want my kids to be informed, compassionate, engaged, and resilient adults. I know much of that comes about through experience. I also want them to be centered and grounded, confident in their place within the world. I know a big contributor to those qualities is a sense of safety and stability within their home. I also don’t want them to succumb to despair, and despair is a function of feeling powerless.

So that they’re informed, I’m talking to them about root causes. They know about slavery and Martin Luther King, Jr., so I’m trying to connect the dots. I’ve explained to them that my uncle, their cousins’ own grandfather, had known MLK. MLK is not ancient history, and his struggle continues today.

To spark compassion, I’m telling them stories of people they know and care about. That not only makes it real for them, it makes it personal. They’re just a few years removed from cartoons – faces on television, even faces of suffering, don’t hit home like the struggle of real life humans they can touch and feel.

And on that note, to encourage engagement, I’ve thrown a few hypothetical questions at them about how they, as white kids, should react in the presence of overt and covert racism. They have a responsibility, and they need to know that. It falls nicely into other lessons I’ve been teaching them: their actions have consequences, and they affect other people whether they mean to or not.

And finally, resilience comes with the knowledge that there is a positive way out of this morass. Change is possible, and each of us has agency. When they asked me last night, I told them honestly that I have marched with the people in the streets, but wasn’t marching tonight, so I could be with them. I told them about protests in the ‘60s that led to the Civil Rights Act, and later to the end of the Vietnam War. I linked it to the Boston Tea Party, which my 5th grader studied in school this year.

Ultimately, my efforts were rewarded with the sound of two boys snoring. I have no idea how much got through to their sleepy brains, exhausted from a summery Saturday. It’s all a work in progress—a mess in need of blessing—but we’re getting there.