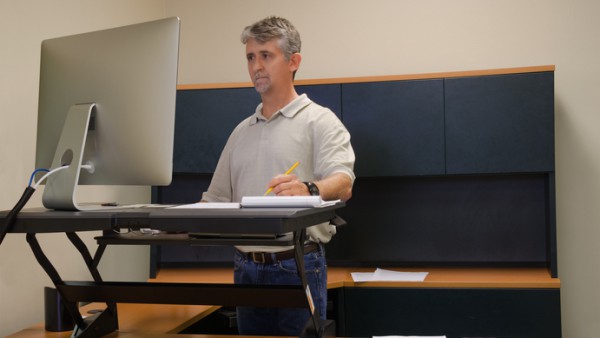 I sit a lot. Really, a lot. Between work, eating and TV/R&R time; I estimate I sit an average of 14 hours a day — add in sleeping, and I’m not standing more than 20 hours out of every day. And while that seems outlandishly high, I suspect that I’m not alone.

I’m also not alone in wanting to do something about it. There are stories across the blogsphere of people doing exactly what I’m about to describe, many of them with much more creativity and conviction than myself. While everyone’s reasons are a bit different, for me it was a culmination of wanting to change things up in my work environment and also hopefully negating some of the health risks that sitting so much can lead to.

The article is careful to mention that the research only shows a correlation, not causation; and it points out that it could simply mean that people who sit so much are generally not as healthy as those who don’t. Potential health benefits noted, I also had a hankering to change things up in the office, and this seemed like a good way to do that. So I decided to convert my desk into a standing desk.

I considered a number of ways of doing this, some involving an afternoon covered in slivers and sawdust and some that would have me emptying my wallet. As this is my initial venture into the wild world of standing desks, I decided to take the middle road and purchased the following off of Taobao:

This needs to be put to music.

As you can see, the device sits on any flat surface, and so makes any standard sitting desk into a standing desk. I use dual monitors (a 17″ laptop paired with a 22″ desktop LCD) in a vertical configuration, and this system works pretty well for that. The quick setup and low price tag mean that I’ve committed relatively little to this stand-to-work experiment. I’ll note that I did strongly consider this Furinno laptop stand

, which came highly recommended in the reading I did about standing desks; but for my computer configuration, it just wasn’t large enough.

The contraption arrived a little more than a week ago. Here are some observations: 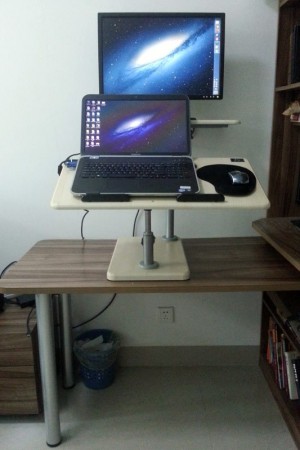 Standing all day isn’t a picnic. But nor was it meant to be. Picnics look silly if you’re standing. Most of what I read indicates that there’s not a huge difference health-wise between sitting still and standing still. However, what standing forces you to do is move around a lot more. I am constantly shifting my weight from foot to foot, I’m more inclined to step away from the computer to ponder a problem, and if music is playing, I embarrass myself for no one to see.

Your feet need cushioning. I live on a tropical island. This means two things — my floors are hard stone tile and my feet generally don’t have socks on them more than a few days a year. Neither of these things were particularly a problem when I was sitting, but bare feet on a cool hard floor sucks. Until yesterday my solution was simply wearing shoes, and this worked well, but my toes were missing their freedom. So, yesterday I commandeered one of the wife’s old yoga mats, diced it into three, and am now using it as a poor-man’s anti-fatigue mat. It works reasonably well, but assuming I adopt this way of working long-term, I think I’ll invest in a proper anti-fatigue mat

Sitting never felt so good. It used to be that by 3-4 p.m. my rabid daily consumption of coffee would catch up to me and I would get extremely fidgety, requiring me to get up and walk around a bit. While the obvious solution would be to cut down on coffee, standing up all day has the added benefit of getting the fidgets out of me throughout the day. It does mean, however, that later in the day I’m finding myself a bit more run-down. To combat this, I’ve started assigning one or two tasks that I’ll complete sitting at a sit down desk I also have in the office for an hour or so in the afternoon.

Unplugging was never so easy. I’m not sure if it’s because standing while working still feels a bit unnatural, or if it’s just that I’m already standing, but getting away from my computer has become much easier. For some this might be a distraction or a negative thing, but I really like it. I like that I can just sort of wander away and contemplate things by the window; or what have you. I recognize that it’s likely subliminal, but there just seems to be an additional level of disconnect from the computer, which after years and years of near surgical attachment, feels refreshing. It’s also broken up a bit of a compulsion I’ve had about how everything is organized for getting down to work. In the past, any time I’ve had to work in a different environment, I found it a challenge to focus — apps aren’t on the right screens (as I’m usually missing a screen), I have to ALT-TAB a bunch more, my pens aren’t where they should be (ok, admittedly, this might be a touch of OCD). But switching things up, and giving myself motivation to go sit by the window (or outside!) with my laptop for mundane tasks like e-mails or social media correspondence is a great side-effect to the switch.

Increased focus. Being able to disconnect hasn’t negatively affected focus when I’m in front of the monitor though. I am not sure if it’s that I’m shifting around a bit more, and so on some level a bit more “awake”, but I tend to be able to focus on tasks for longer periods of time. It may also be because standing is slightly less comfortable than sitting and thus I’m not keen to stand here any longer than needed, so have more motivation to just git ‘er done.

Standing tall. My posture isn’t terrible, but it was sure heading that way — as you might expect from someone who spends the majority of their waking hours hunched over a keyboard. Even with a comfortable chair with lumbar support and monitors at proper eye height, I have routinely found myself with crippling lower back pain. It is too early to tell if standing while working will help eliminate these problems, but there does seem to be a case for it (see here, and here).

Feel the burn. I really don’t believe standing up all day is magically going to disappear the extra pounds that have accumulated over the years around my hemisphere. However, as measured by the Compendium of Physical Activities Tracking Guide, standing does burn about 20-30% more calories than sitting. According to this calculator, that means I’m burning north of 500 extra calories a day now that I stand while working. For a guy that wants to lose weight, that’s definitely one for the “pro” column.

There’s nothing particularly new or novel about standing up to work at a desk. Many of the “I now use a stand-up desk” posts out there list off the following people as fellow standing-deskers: Benjamin Franklin, Donald Rumsfeld, Ernest Hemingway, Leonardo da Vinci, Thomas Jefferson, Vladimir Nabokov and Winston Churchill — among others. I’m not sure that means anything though, as you could just as easily create a much longer list of brilliant people who presumably just used the regular sit-down desk.

However, what I did find interesting was an article from The Atlantic dating back more than half a century entitled “We May Be Sitting Ourselves to Death“. The article is amazing. It oozes with mid-century Cold War wonderfulness. The following should be read in black and white:

It is perhaps conceivable that through the process of evolution there may eventually develop a human or super-human species that is largely brain, with only enough additional physical development to provide one finger for pushing buttons. If computers are ever able to take over some of the more intricate thought processes of the human brain, we might even reach that stage where the machine can reproduce itself, thus eliminating the need for human beings to push the buttons.

It seems entirely focused on making sure the Americans of the day are ready to defend their dear nation (“The Selective Service system has been rejecting one out of each two young men called for duty in the Armed Forces because of physical, mental, or moral unfitness.”), but it was interesting to read that even 50 years ago this was on people’s minds.

I’ve referenced a handful of articles above, several of which are personal stories about switching to a standing desk. One of the best is Gina Trapani’s article on why and how she switched to a standing desk, and her follow-up  a year after the switch.

Here are a few more stories/articles on the topic I enjoyed reading: