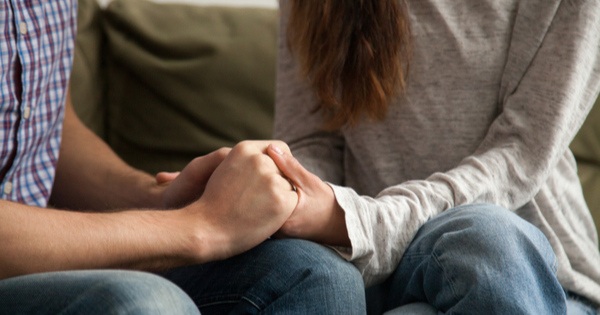 Sol was an account executive with a broadband company. He worked his ass off at work. You know, the whole “climb the ladder” thing.

But even better for him, he loved what he did. Much of his work served the developed world. A mission he believed in.

At home, it was good and all but… there’s always a but.

Anyway, he came to me a year ago and this is what he said.

“I love my wife. She’s a powerhouse. She makes magic happen. And we make a great team.”

“I have to live with her ONLY from the waist up.”

That’s code for we never have sex.

“It’s crushing me. And I’m thinking, I have to leave the woman I love,” he said.

He and his wife had flatlined. Just like many married men I see.

“I don’t see any other options,” Sol said.

“And if there were? Would you stay?”

“Well, I have some ideas. Would you like to talk further?”

He said yes. And that made all the difference.

And within 3 months, Sol was living in his marriage with his whole body, not just the waist up.

It was quite simple.

First, he decided that he could no longer accept the status quo. Sounds simple enough, but that alone is huge.

Let’s face it, speaking truth in a marriage can be a high-risk proposition.

What if he got a no from his wife? What if she shut him down for good?

Well, a lot of guys just accept what is or they speak up in a way in which they’re doomed to get the answer they don’t want.

You see we have this thing called “confirmation bias” where we get the answer we expect. But not Sol.

After just a few months of working together, he learned fast that his desire sex for wasn’t just about sex.

It was about…
…taking risks
…embracing uncertainty
…speaking in a way to his wife that said more than just “I want sex!”

In truth, a groveling dude is a major turn off. And so is a macho jerk. Sol was neither. He was assertive and vulnerable.

He stood in his power, spoke his truth lovingly, and brought his marriage back from the dead.

And he learned this. A man speaking lovingly what he wants is super sexy to a woman.

Go deeper. Check out this video to learn how to get what you want in your relationship.