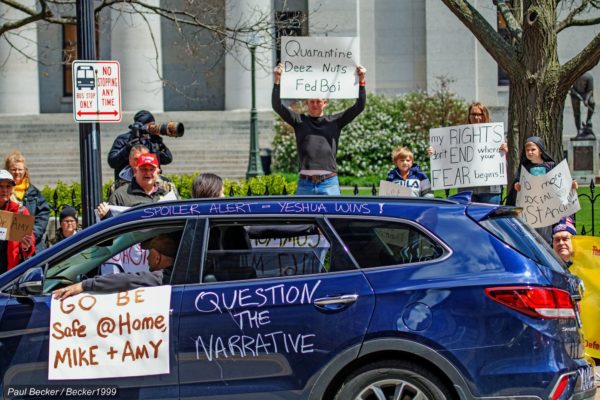 No one enjoys having their freedom constrained.

No one likes being told where they can go and what they can do.

Because humans are fundamentally social creatures. We are not, contrary to popular American belief, merely rugged individuals. If we were, we wouldn’t mind isolation the way we so obviously do after a month or so of sheltering-in-place and following stay-at-home orders amid a global pandemic.

Even the most self-directed and introverted among us, who often revel in a bit of alone time, have limits.

But responding to this extraordinary moment, during which we are being asked to physically distance, and — for those who can — stay home while the curve of infection flattens, by picking up guns and heading to the state capitol to protest “tyranny?”

That is not merely indicative of a healthy human desire for connection. Nor is it a reflection of freedom-loving people, driven stir crazy by the overreaching hand of some nanny state.

That is something else.

Specifically, that is some white shit.

By which I mean the privileged move of (overwhelmingly) white people, who think that not being able to get their hair cut, or get seeds to plant flowers in their gardens for spring is tantamount to fascism. Yes, that’s a thing:

Or the stupendously Charmin-esque quality of standing with a protest sign that says, “Let My People Golf.” No, for real, that’s a thing:

Only white people — and not particularly poor ones at that — could manifest this kind of mentality in numbers this large. Only people for whom daily life is pretty easy could believe that the closing of bars, gyms, restaurants, and sporting events was a precursor to the gulag.

Ya know who doesn’t think that way?

Well, I mean, black people other than Diamond, Silk, Candace Owens, and MAGA grifter, Terrence K. Williams, who cons white conservatives into getting his name trending every few months by insisting liberals are threatening to kill him.

Which is actually pretty funny, because despite how much Terrence K. Williams clearly reveres white people, he also knows something unflattering about us: namely, that many of our tribe will fall for anything.

Or that Barack Obama wasn’t born in the U.S.

Or that Anthony Fauci is a deep state operative and that Donald Trump is on the verge of busting up a pedophilia ring run by Hillary Clinton.

Or like the idea that Elon Musk — who was born white in apartheid South Africa — is self-made.

Because gullibility is also a privileged move.

People of color rarely have that same luxury, at least not at this high a level of dosage.

They don’t typically have the privilege of thinking it’s oppression if you can’t go to the beach or get on a pedal tavern in Nashville with your bridesmaids and exercise your way around town while drinking beer: itself the absolute whitest pastime ever invented.

They have police to worry about, and not because the cops might give them a hard time for being less than six feet apart from someone else in a public park. Rather, because the cops might presume them criminal — even for merely wearing the same kind of face covering we’re all being encouraged to use — and toss them out of a store.

Or, if history is any guide, worse.

Folks of color are facing anti-immigrant hysteria and disproportionate COVID death thanks to racial inequity that has left them at higher risk. And of course, for anyone of Asian ancestry, there is the specter of rising hate crimes directed at them as the supposed source of the present danger.

Meanwhile, white folks never have to worry about something like that.

When the CDC determined that the H1N1 flu in 2009 had its origins in North Carolina hog farms, white farmers weren’t worried about being blamed, let alone physically assaulted. Nobody boycotted Jimmy Dean sausage.

And now, screaming about totalitarianism, the same kind of white folks who protested the Affordable Care Act — because some of them would rather die than get health care from the black guy, or from a program that might also help some black people — have taken to the streets yet again.

They have dusted off their Gadsden flags, or their Confederate flags (like I said, white people), added anti-vaxxer placards (again, mostly white people), and are presently ranting about stay-at-home orders being communism, or perhaps Nazism. They don’t know the difference and don’t care. To them, oppression is such an apparent abstraction, actually knowing the proper taxonomy of whatever awfulness you’re protesting doesn’t matter.

Because this isn’t about logic.

This is some white shit.

As is saying, “Jesus is my vaccine,” which vanilla stupidity featured prominently on a truck that drove through the anti-lockdown protest in Pennsylvania this week. Thinking Jesus is all you need to get through danger and difficulty is something only white people can generally swallow. Black folks know from lived experience that faith without works is dead. Oh, and also that medicine works and things like measles are dangerous, so they’ll readily take the shots that millions of white folks fear because noted scientist, Jenny McCarthy, insisted they were poison.

Still more whiteness: “Economist” Stephen Moore suggests these protesters are the moral equivalent of Rosa Parks. It is almost comically difficult to imagine saying something whiter than this: to believe that protesting government actions intended to keep people alive is the same as protesting government actions designed to treat millions of people as second-class citizens.

Difficult, but alas, not impossible. As it turns out, the competition for gold in the Whiteness Olympics (which by the way are never canceled) is fierce. To wit, the late entry from Idaho state legislator Heather Scott (R-UzBeckystan) who notes that closing down businesses deemed “non-essential” is “no different than Nazi Germany where you had government telling people either you were an essential worker or a non-essential worker, and non-essential workers got put on a train.”

Yes, because Pilates instructors and vape shop employees are literally headed to Auschwitz if the liberals get our way. Had it not been for this damned quarantine, we’d have already fired up the ovens. Trust.

I’m not sure if that’s insane. But I know what it is.

That is some Miracle Whip wingnuttery. Some albumen asininity.

Indeed just showing up at a state capitol with loaded guns and camo, screaming about tyranny is white as fuck. I fantasize about black folks doing that, or Muslims doing it, to protest the stuff they have to deal with on a regular day, no pandemic required.

Or rather I would fantasize about this, but I don’t, because I know what would happen. They would get shot, or at the very least arrested en masse. And they wouldn’t have the president saying they seemed like “responsible people,” or signal boosting their message on his Twitter feed.

Because whiteness lets people get away with this nonsense.

Just like how, during the Obama years, it covered for overcompensating firearm fetishists who regularly gathered, strapped to the teeth, to protest what they just knew were pending gun grabs from the Gay Kenyan Muslim in the White House.

Just like it protected rocker Ted Nugent when he called Obama a “sub-human mongrel” who can “suck on my machine gun,” and then did the same for Sean Hannity when Hannity was asked about Nugent’s hateful, bloodthirsty rant and refused to criticize it, insisting that Nugent was “a friend.” Naturally, Donald Trump has hosted Nugent at the White House, because they both take the white part to be about more than paint color.

Because apparently, irony is also ivory.

These people don’t care about big government. They don’t care about tyranny. They support a guy who proclaimed, before he backpedaled in the face of the plain wording of the Constitution, that he had total authority to override state lockdown orders. They said nothing in the face of this declaration of dictatorial power. Because it isn’t government they hate, or authoritarianism. It’s government in the service of the wrong people. Or in the hands of the same. So long as government is being used to “own the libs,” punish the poor, and deport or incarcerate the black and brown, they’re fine with it.

Because America is on some white shit.

And there are an awful lot of folks determined to keep it that way, even if it kills them.