The last nine months together constitute the wettest such period experienced in the english city of oxford since record-keeping began in the eighteenth century. 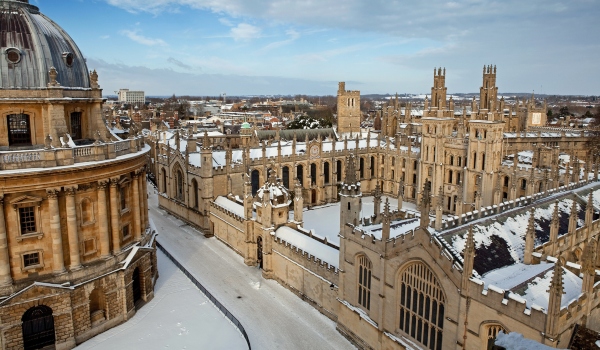 LONDON – Oxford, home of the oldest university in the English-speaking world and known as “the city of dreaming spires”, has another claim to fame (if that’s the right word). It has just recorded its wettest consecutive nine-month period. Nobody can say what the cause is: a stuck jet stream, climate change, or pure luck. But on 1 April 2012 local meteorologists began recording what proved to be the rainiest nine-month stretch in almost 250 years, since 1767. By 31 December, they had logged 898.7mm of rain, nearly double the average nine-month rainfall of 483.4 mm. Of the more than 2,900 rolling nine-month periods occurring since 1767, only eight others have surpassed the 800mm level. May 1852 to January 1853 was a close second with 892.1 mm, and May 1960 to January 1961 was third with 875.6 mm. “April to December 2012 really was dramatically extreme”, says Ian Ashpole, doctoral student at Oxford University’s School of Geography and the Environment and one of the recorders at the Radcliffe Meteorological Station who are responsible for monitoring daily records from the station and maintaining its archives. “Essentially, this was because when it rained it poured. We didn’t have that many more days of rain than usual, but when it rained we generally got a lot”. The evidence shows that, rather than there being many more days of rain, it was these high levels of rain when it did fall that made the nine months so wet. There were 179 “rain days” (days with more than 0.2mm of rain), only 11 more than would be expected. However, a very high proportion (147 days, 82%) of these rain days were “wet days” (days with more than 1mm). April, for instance, had an unbroken string of “wet” days from the 16th to the 30th, and 30 % of October’s total rain fell in one night (17th/18th). In November 63% of the month’s total rain fell between the 20th and 24th, and December had an unbroken string of “wet days” from the 20th until the New Year. Oxford’s weather has continued to surprise in 2013. January saw an unusually high number of days (13) with snow lying on the ground – nine more than the long-term average. There have been only five previous Januarys since 1767 with more snow days. February’s rainfall was only slightly more than usual, but nearly half of this fell on one day (the 10th) with most of the rest falling on the 9th and 11th. Except for these three days February was very dry. March’s mean air temperature was 3°C, which is 2.9°C below the long-term March mean, and the seventh coldest on record.

The mean maximum temperature for the month (daytime) was the coldest on record at 6.3°C (compared with the long-term March mean of 10.1°C). But the mean minimum temperature (generally corresponding to night-time/just before sunrise) was not nearly as extreme. It was in the top 30 coldest years, but nothing more remarkable than that. A possible explanation for this difference, the researchers say, is that more cloud cover produced both less warming during the day and also relatively less cooling at night. Perhaps the most interesting finding is that the record appears to support scientists’ finding that global warming will produce warmer air with greater moisture-holding capacity and that therefore there will be a greater chance of extremes. By way of contrast, 2011 was Oxford’s joint second-warmest year on record. This means six of the top ten warmest years on record for the city have been since 2000, the warmest being 2006. The data apply only to the city of Oxford and a short distance around it, and tell us nothing about weather elsewhere in the UK or further afield. The Rad Met researchers who have produced the data take their name from the Radcliffe Meteorological Station, situated in Oxford’s Green Templeton College, which possesses the longest series of temperature and rainfall records for one site in Britain, continuous from January, 1815. Observations of rainfall, cloud and temperature exist from 1767. Those seeking for some rhyme or reason in this welter of apparently unconnected weather extremes should perhaps remember that the poet Matthew Arnold described the University of Oxford as “the home of lost causes”. – Climate News Network