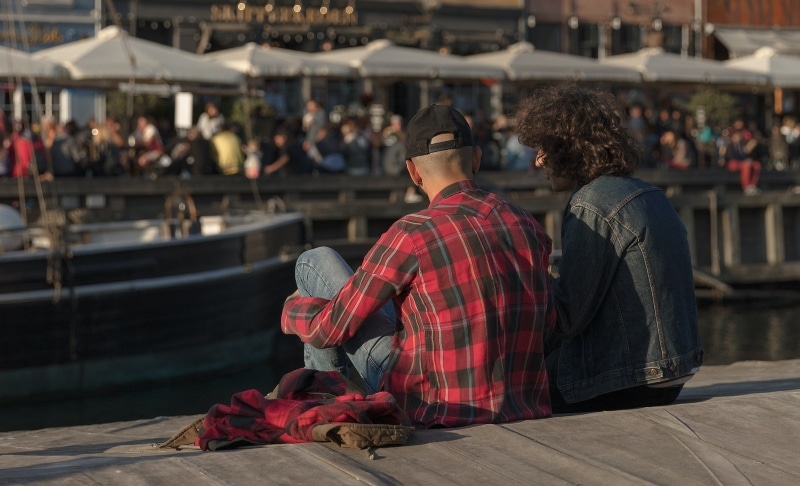 —
Brace yourselves for an unpopular opinion:

The length of a relationship doesn’t dictate the quality of it.

Time is but a number. Love lasts because you both put in the work, not because you’re the longest standing couple in your social circle.

There, I said it.

I can only imagine the objections from folks who believe that you need time above all else for true love to take root.

What about the couples who marry after a month and divorce a month after that? Or the pairs who get too hot too quick and then fizzle out once the infatuation wears off?

I hear you, I hear you. There’s anecdotal evidence that humans think with their hearts (and/or their hormones) instead of their brains sometimes. I’m not saying that people never mistake a good feeling for a good idea and jump the gun when it comes to getting hitched too soon.

My point is that outsiders often judge a relationship’s likelihood of success based on the amount of time it has spent developing. They plant destructive seeds of doubt into those inside the union, which can create a self-fulfilling prophecy if not kept in check.

I’ve seen this pattern firsthand when it comes to my marriage. My husband and I dated for a little over six months before we headed to the courthouse to get married. So far, we’ve overcome obstacles and enjoyed the healthiest romance of our lives without a hitch.

Even though our love incorporates many of the ingredients a strong, lasting relationship should have, some naysayers questioned the speed at which we were pursuing milestones such as engagement and marriage.

Ultimately, we ignored others’ opinions of us and switched gears at our preferred pace. Our love has been better off without external influences.

I’m writing this post partially to hush up the naysayers. But my main motivation is assuring those who are letting love move at its own natural pace that your timing is right as long as it feels right for the two of you.

It is perfectly okay — and good — for some couples to tie the knot six months or less into their romantic relationship. From the first text, call, in-person encounter, subway bump, etc. to the Big Day where you pledge your lives to each other for (hopefully) forever, half a year is plenty of time.

I’ll admit, I’m not completely impartial when it comes to this conclusion. Call it survivor bias or empirical proof, but I firmly believe that a relatively new union can hang with the best of them.

Whether you’ve been in love for hours, days, weeks, months, or years, a relationship that’s ready to move on to the next level will have most of the following qualities.

“Sacred Cows” are those topics, conversations, and ideas that you do not under any circumstances cross with a person. These may be as large scale as religious ideologies and as small scale as the cap must always go back on the toothpaste after brushing.

Get to know these buttons early on and proceed to never push them after that. You’ll save yourself a whole host of unresolved conflict down the road and in the short-term you’ll have a stronger understanding of what is most valuable to each other intellectually and emotionally.

This will lay the foundation for the way you approach one another moving forward.

You keep open communication every step of the way

You may not share every single thought and feeling that crosses your mind. However, when it comes to the other party’s mood and their main idea of the day, you’ve got a pretty good idea of what’s going on.

Forget about beating around the bush, games, or BS. Neither of you expects the other person to read your mind. You spell things out clear as day. When in doubt, you ask and they answer.

Due to religious or situational reasons, cohabitation before marriage is not always practical or preferred for some couples.

However, in the event that living together is off the table, you should still clock some hours of quality time almost every day in some way.

Whether you connect in person, over the phone, or video chat is irrelevant. The aim is to understand whether you like each other enough to share your space for significant chunks of time before you’re legally bound to one another rather than after.

You’re no stranger to each other’s pasts because you’ve discussed them at length. Any skeletons that might have been hanging out in the closet have been hauled into the daylight.

No ghosts of crises past or present will haunt your union. At least, none that are unwelcome or unexpected.

You hold the same dreams for the future
Or, you can compromise on the small stuff and agree on the bigger picture.

Even if you don’t have the same goals for children, careers, ideal roles, and the like, you can strike a balance that keeps both parties at bay.

Maybe your partner isn’t into the concept of having biological kids but they would consider temporarily fostering children in need of a safe space.

Perhaps you envision settling down in the countryside and they have a more urban setting in mind, so you meet in the middle and hunt for a suburban apartment that’s equally accessible to rolling fields and bustling city streets.

You’re building a life together, so it’s okay if every detail doesn’t match to a tee. The important thing is that your major goals are aligned and everything else stays relatively negotiable.

Even though no one likes to think about divorce, separation, or crisis couple’s counseling before they’ve even entered the perceived honeymoon stage of marriage, this is a necessary conversation to set yourselves up for success.

If you can’t even broach the subject of the big bad “d” word, you’re probably wrapped up in the love-drunk wedding bells high and should maybe consider pumping the brakes before you crash from the infatuation to “what have I done?”

It may seem counterintuitive to discuss the end of a relationship before an exciting new stage has even begun. But trust me, a boat that’s built to stay afloat won’t rock just because you’re formulating a plan for what you’ll do when the waters get choppy.

Divorce and separation don’t quite fit in with the typical giddy wedding planning convos. However, establishing an exit strategy before you’re deep in the trenches can benefit you in the present and the future.

From a practical standpoint, sharing your views on coping with a marital crisis before it happens ensures that you won’t be screwed over if this ‘ship sinks. From an emotional standpoint, it can alleviate those feelings of being trapped that come along with the early days of a lifelong commitment.

From one hell of a “Hello,” you knew they were “The One”

How cliche and frustrating for couples trying to figure out whether they should tie the knot today or three years from today, I know.

Using my love as an example, RJ and I ended our initial nine-hour chat feeling pretty certain about each other and woke up the next morning from the same dream in which we introduced one another to our parents as our spouse. We took the hint and ran with it.

It’s not fair or accurate that society assumes that a short relationship is automatically doomed to fail.

And when it comes to love, what is success and failure, anyway?

Even if a relationship reaches its jubilee anniversary, there’s no guarantee that it won’t be entrenched in misery and resentment.

And should two lovers go separate ways, they may find an improved existence without the other half while treasuring the contained time they spent together.

Even a “rushed” relationship that ends with a crash has its lessons to teach. I’m all for making informed, mature, levelheaded decisions. But I’m also for falling in love and not questioning your pacing so much that you end up questioning your joy and chemistry along with it.

If you’re having doubts, no one can make you investigate the root of those insecurities. And if you’re happy and you know it, no one should be able to derail your trajectory with some generalized blanket advice.

You can’t hurry love, that much is true. But you don’t have to wait just because of social norms, Love Doctor Google’s search results, or some stranger’s opinions on the internet.

Follow your heart, take input from your head, proceed with reasonable caution, and let yourselves love without overthinking whether you’re doing “all the right things” at all the right times.