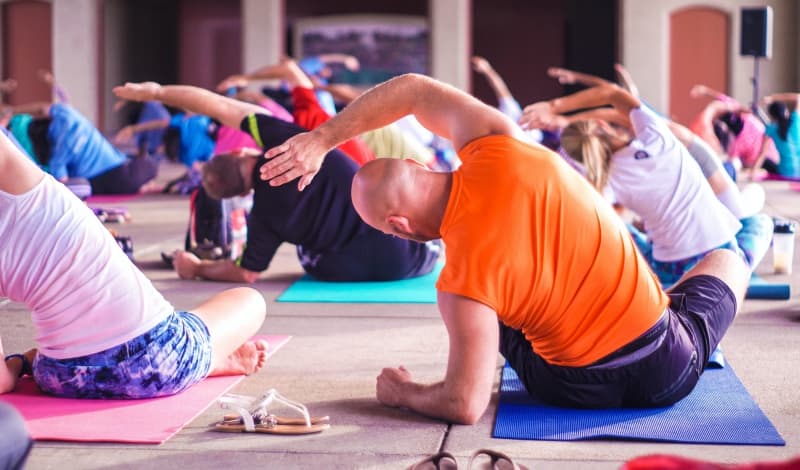 Five solid reasons to get on that mat and start now!

Have you thought about trying yoga, but decided it was too intimidating to go to a class full of confident, super bendy women? Do you think yoga might be too feminine and soft for you? do you think that you need to be flexible to start yoga? I used to have some of these misconceptions. As a man whose body was rescued by yoga, I’m here to tell you that these aren’t true.

Yoga has done me so much good, physically and mentally. And yet, when I go to a live class, I’m the only guy there. If I bring it up in conversation, guys seem to dismiss it based on their preconceptions about what it is. And they buckle to peer pressure, being afraid of seeming unmanly if they do yoga.

That’s why I want to get the word out and show men that yoga has a lot to offer. I can’t find a single downside to starting a yoga practice. In fact, I had so many positives I had a hard time narrowing it down! Here are Five Solid Reasons that men should start doing yoga as part of their fitness program.

(Note: Right now, for self isolation reasons, there are more online video classes on the go than ever before. If you are wanting to try yoga but don’t want to go in person, this is the best time to start! You can practice in your own home, in private. No need to worry about anyone laughing or pointing. Contact your local yoga studio- they are probably running a convenient online class with Zoom, YouTube, etc.)

It’s amazing how much of a workout yoga can be. Flowing from one pose to another will work muscles you didn’t even know you had, from head to toe. Rather than focus on one area of the body, you end up working multiple muscle groups at once. Core muscles really get a chance to shine, and to grow.

The body weight aspect of yoga is huge. For this workout, the equipment is gravity and your body’s mass. Remember, as a guy you weigh more than the average female yogi. When you are in a pose, your challenge level is suited for your size. In many of the poses you are holding up a lot weight, and you will know it!

Let’s look at a common Vinyasa yoga pose, the Chaturanga, from the muscle workout point of view. This one move will work out the back muscles, arms, shoulders, core and wrists. You start in plank position. With slow and controlled movements you bend your arms and lower down, elbows against your sides, until your elbows are at the same level as your shoulders. From here, you might move to Upward Dog, after pausing.

Does Chaturanga sound like an easy move, too “girly” for you? Well, lets do a bunch of them and then we’ll talk!

2. Yoga Makes You Flexible and Increases Range Of Motion

I know a lot of guys who go to the gym and work out. And I know plenty of men whose biggest workout is lifting heavy things like sandwiches and office paper. The one thing almost all of these dudes have in common is their lack of flexibility. I think this is a major weakness that impacts not only your health, but how effective any other exercise will be too.

“I can’t do yoga. I’m not flexible enough!” This ridiculous excuse has to die. Flexibility is the result of yoga. It is not something you need in order to start. That’s like saying that overweight people are too large to try weight loss. It’s like saying toddlers are too small to try growing taller. It’s like thinking that a teenager is too inexperienced in driving a car so they may as well never bother.

If you are not flexible, then that is exactly why you need yoga! It will improve all of your other activities. For those who are adding muscle bulk, retaining flexibility can become especially important. It’s easier to stay flexible through life instead of trying to get it back when you are all crippled and stiff. But even then, yoga can help you.

Who doesn’t want to deal with stress better? I have never talked to anyone who said “Stress? Anxiety and emotional pain? Bring it on! I love that $hit!” Maybe you are that one weird guy that wants to feel emotionally unhinged, on the edge, stressed out of your mind and ready to blow a gasket. If you are that guy who wants to be stressed , then definitely do not do yoga, because it will throw you off your game.

Slowing down and breathing is a big part of most yoga practices. What this does for you is stimulate the vagus nerve, and it does so much good for your entire system. How about reduced chances of cardiovascular disease, lowered levels of cortisol in your blood, and lowered levels of inflammation throughout your whole body? Sign me up.

I know from personal experience that the one thing which will make any day better is yoga. I end up feeling relaxed, in a positive frame of mind and better able to take on the world. The stress relieving effects of getting on that mat are noticeable and immediate. Give it a try!

4. Meet Some Happy, Healthy, Like-Minded People Who Are Doing Yoga Too

Another great reason to start doing yoga is social connections and meeting new people. If you are reading this while in self isolation, don’t despair. Even an online zoom class will get you those connections. It can be a way to make friends with a shared goal of personal care.

If you are a single guy and you like meeting new people, then an in person yoga class is a great thing. From a heterosexual male point of view (the only one I have personally), the ratio of males to females is really favorable for me. I like being around women who are fitness minded and doing positive things for themselves like exercising, increasing flexibility and generally working on self improvement. If you want to maximize the chances of meeting people like that, then go where they are. Hint: they are in yoga classes. Disclaimer: Don’t be a creeper! Go if you want genuine human connections.

I really don’t understand why more guys aren’t doing yoga for this one reason. Are you more interested in hanging out with sweaty, grunting men who throw weights on the floor and drip their manly perspiration all over everything? That isn’t what I like in an exercise environment.

I started doing yoga because my body was a mess. I had crippling lower back pain. If I had to stand around on concrete all day, it would get so bad that I’d be popping pills just to keep from screaming. I also had a sore neck, and one shoulder that was a total mess. These were just the problems that hurt so bad I couldn’t ignore them. I was a frequent visitor at the chiropractor and massage therapist. They did their best, but they were just masking the symptoms of what was really wrong. I was inflexible, with built up scar tissue from all the abuse I did to my body over the years. I had poor circulation to those ill treated muscles and connective tissues.

After I started doing yoga frequently, I realized that my lower legs and hamstrings, the bottoms of my feet, the muscles in my sides and pretty much every other area of my body were tight and sore.

Eventually, I stretched and exercised and worked all of those areas, through yoga. This was not an overnight process, but I could feel steady improvement after almost every session. Now, I have almost zero lower back pain no matter what I do. Through the various postures and the deep breathing, increased blood flow and muscle growth has cleaned up my system. Toxins and old scar tissue, lactic acid buildup, all alleviated through yoga. Stiff and stuck fascia is now limber and moving more freely. I’m like a new man.

For me, yoga made the difference between being a middle aged sack of crap, or having a fully functional and healthy body. I am so grateful I started doing yoga, just for the pain relief alone. It was a game changer.

This is only five reasons why yoga is an activity that I think all men should be doing. What do you think? Are any of these five something that is important to you? If so, then why not give it a try?

And you have experimented a little, then you might sense that frequent yoga will really have some positive effects on your life. I think you owe it to yourself to be the best you can be, physically and mentally. Yoga can help you optimize everything you do. It feels good, lets you socialize with cool people, and fixes your body, all at the same time. What are you waiting for? Go do some yoga!

This post was previously published on Change Becomes You and is republished here with permission from the author.
—