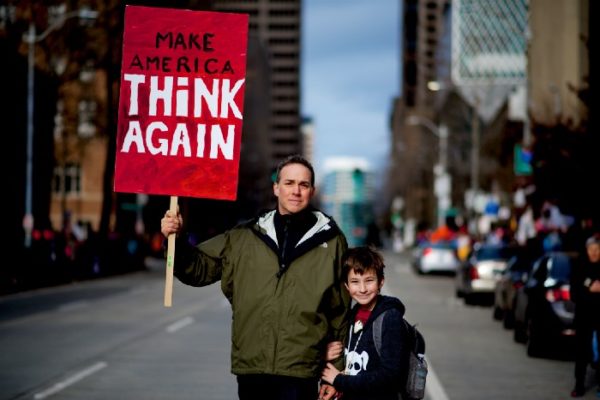 When Donald John Trump was on the political stump in red gimme hats inscribed MAGA, for “make America great again,” some of us were puzzled about when our national status slipped so far that the slippage should be a national political issue.

We still had the world’s most robust economy. The U.S. dollar was the sole reserve currency since Bretton Woods I and Richard Nixon kissed the gold standard goodbye. The primary means of projecting military power had become the carrier battle group, of which we had 11, more than the entire rest of the world combined. We have won more Nobel prizes than the next 10 nations put together.

While the United States does not give as much per capita as many other nations, the sheer size of our contributions combined with our logistical ability means that food and medicine and building materials with U.S. markings show up at the scene of most international disasters.

All is not puppies and kittens. The U.S. is the biggest dealer in military arms. The U.S. has long ago lost its status as the nation with the most social mobility. We have the most expensive health care in the world while remaining far from the top in health outcomes.

While there is much room for improvement and some absolutely disturbing trends, the fact remains that nations are seldom discussed in superlatives while leaving out the United States.

History is not Mr. Trump’s academic strong suit, assuming he has one. Attempts to have him clarify exactly when America had the greatness he wants to restore usually founder on the rocks of his ignorance or they end up all the way back with the Founders of the nation.

The problem with an excursion that far into the past seeking greatness is that America has changed radically several times in extra-constitutional ways, making it hard to argue that the men who made the deal with the devil to protect chattel slavery bequeathed a nation that survived into the 21st Century.

That corrupt bargain blew up in a fight called the Civil War. Was postbellum America the America of Washington and Jefferson? Well, no. The so-called Reconstruction Amendments — 13th, 14th, and 15th — were not ratified within the terms of Article Five, but rather at gunpoint. The Confederate States were required to ratify the amendments that wiped out the compromise with slavery as a price for readmission to the union.

The abolition of slavery combined with extending the franchise to freedmen will eventually change the color of American politics, pun intended. Should that last sentence have been past tense? Judge for yourself.

There was no effective legislation to enforce the 15th Amendment until the Voting Rights Act of 1965. Then, in 2013, the Supreme Court pulled the fangs of the Voting Rights Act by voiding the preclearance provision, a decision comprehensible only by lawyers who never had to play cat and mouse with other lawyers intent on racist results. The right to vote is not yet secure.

There was then an inconvenience called the Great Depression, which was attacked on all fronts in major legislative assaults collectively known as the New Deal.

Opponents of the New Deal claimed that the American social contract was being rewritten without amending the Constitution. If extant constitutional interpretations were part of that contract, they were correct.

Union membership — “criminal syndicalism” in some states — was protected by federal law. Items built by child labor could no longer be sold in interstate commerce. The Fair Labor Standards Act amounted to federal regulation of wages and hours, matters never thought to be within federal power.

There is much, much more that amounted to a judicial about face, but after FDR’s court packing idea was mooted by the “switch in time that saved nine,” laws unconstitutional, (5–4) suddenly began to be upheld (5–4).

Read over the 10th Amendment and reflect on what the Founders would have thought of the New Deal.

As lawyers tend to do, I have cherry-picked historical examples to support my argument, which is that there is no one period when America was greater than it is right now. Our country has always been a work in progress.

Some people — often citizens of the Mother Country, which gets along fine with an unwritten constitution — -think that a written constitution is a strait jacket that prevents necessary change. Ours — with the sole exception of the Civil War unraveling of the immoral compromise over slavery — -has been flexible enough to accommodate social change on a massive scale.

With the Civil War exception, the deck has been reshuffled and new ways of doing things have emerged. We have managed major change with minor violence.

Coronavirus is the first of what may be pandemics more common than every 100 years, but I’m not sure the frequency of the pandemics is necessary to my thesis.

Just this one pandemic, and the associated economic dislocations and social upheavals, is enough to cause a reshuffle of our social contract deck. If there is no reshuffle, the efforts of those currently born with winning hands to keep their status will amount to change on the same level, primarily in how much application of force to keep the proles in line we are prepared to recognize as legitimate.

In that case, MAGA might become a sensible slogan for those of us opposed to deadly force applied to political ends.