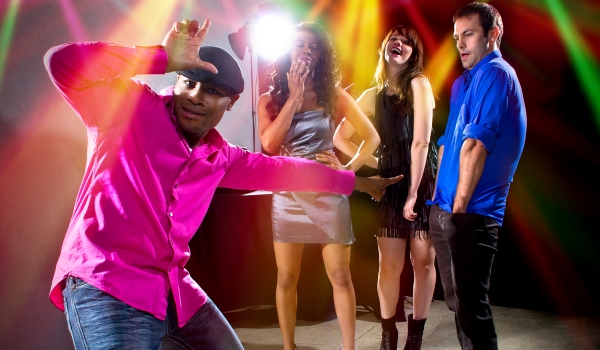 I rarely talk about going out to bars at night, but it’s interesting. The other night I went to a place called Chaya Venice, which is actually in Santa Monica.

Anyway, it was funny. I was watching this group of girls sitting right behind us. They were just talking and having a good time.

Then I see these guys come over to talk to them. It was really funny. The first guy came over, walked up to the girls, and he was Mr. Crash And Burn Man.

He walked over and said, “How is everyone doing tonight?” He had a lot of energy.

It almost felt like he took a moment to think about what he was going to say, but the only so-called clever thing he could think of was ‘how is everyone doing tonight.’ So the girls looked at him and mimicked his energy saying, “We’re doing great tonight! How are you?”

The next thing you know, he hits the eject button. I watched him run away like a scared little boy. He literally walked away, and I was cracking up as I witnessed this.

So at that moment, and knowing human nature as well as I do, I knew that he would go back and try again, because he was in that “what he was doing right and wrong” mode. About fifteen minutes later, he went back to the women’s table and brought his wing man with him.

The wing man was what we call the monkey with the tambourine. So Mr. Monkey goes back with Mr. Crash And Burn Man (aka the guy who failed miserably), and Mr. Monkey basically just entertained the girls for about five minutes.

I watched the women’s reaction to this. They were laughing at first. Then they started getting annoyed because this wing guy, who obviously thought he was good at meeting women, basically wasn’t going to ask questions or really engage in conversation. All he was doing was entertaining them.

He was what I call the monkey with the tambourine because he was nothing more than a performing animal. He went through this five minute speech (all of which I didn’t get to hear), and all I saw was the women’s interest level dissipate.

Finally after five minutes of talking and not listening, the conversation got dull and boring. The monkey with the tambourine guy basically shot his entire load in those five minutes, and so both guys left.

I walked over to the women and said, “So how did the interaction go with the monkey with the tambourine? He was the wing man, and the other guy is the typical good-looking guy who has absolutely no game.”

They were cracking up, and proceeded to tell me that these guys had no clue at all. I asked them what would have worked for them. They looked at me and said, “How about a normal conversation? He brought his wing man over, and it did not work because he really did not listen at all. All he did was perform.”

About an hour later we were having dinner, and they came over to our table. They sat down, talked to us, and asked for advice about their love lives.

The bottom line is that a successful approach and conversation is all based on a simple observation. One of my favorite ways to meet women in a bar is to watch other guys crash and burn, and then walk over to them. Say with a big smile, “What did that guy say to you? He ran away like he was leaving the scene of an accident. What was the funniest thing he said?”

Everyone enjoys talking about Mr. Crash And Burn Man. Be careful, however, not to get all into your heads about this right now. At least crash and burners are trying.

Most of them just don’t look deep enough to realize what they are doing is wrong, and that is why they keep crashing and burning. They are not working on their social skills.

It’s all about trying, tweaking and understanding what you are doing wrong. Maybe the next time you crash and burn, grow some balls and walk back over to the women. Say, “Okay I failed at my attempt to intrigue you. What could I have done differently?” You will be amazed at how receptive she will be and how amazing that conversation can be.

Previously published on davidwygant.com and is republished here under permission.
—