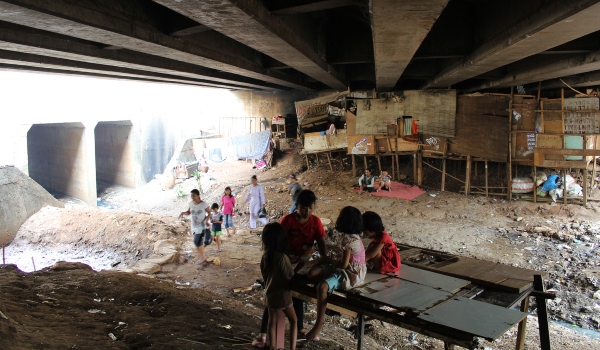 As a sociologist and media scholar with an interest in emerging forms of civic engagement, I initially came to Jakarta – the world’s Twitter capital – to research innovative social media uses.

Instead, my first visits to an informal settlement near an estuary, Kampung Tongkol, in 2015 in North Jakarta, revealed something more hybrid: mixed-media participatory mapping of the settlement’s physical and socio-economic infrastructure. They have also volunteered to partially remove their housing to make way for a road on the riverbank in the hope to avoid forced evictions, which usually happened to build a riverbank road.

Since those initial visits, I have seen the three kampung, Tongkol, Lodan and Kerapu, become prototypes for sustainable flood prevention, stewardship of the river and small-scale economic development. I have observed the weekly cleanings of the Ciliwung, and documented composting and waste recycling and the growth of veggie and fruit gardens.

Jakarta real estate development plays a big role in the economic growth of the country. The new malls, plazas and condo towers convey the image of a modern and cosmopolitan capital. Moreover, these properties are the focus of transnational investment.

The investment is less about buying houses and more akin to playing the stock market. It performs obscure financial operations that provide the flow of virtual capital needed for the development of both commercial and private property. It is known as secondary mortgage facility, developed for years and finally introduced in 2009. Investors everywhere in the world buy financial packages that collect stakes in development projects rather than specific buildings.

This kind of speculation offers very high gains at very high risk. But, because it attracts investment and increases the demand for construction, the private sector and government alike welcome it.

In Jakarta, real estate development is also indissolubly tied to the construction of water infrastructure through public-private partnerships. The National Capital Integrated Coastal Development (NCICD), or giant seawall, is closely linked to Jakarta Bay reclamation project. They rise from this global investment vision to build a waterfront city and despite the controversy and lawsuits both projects are still on the table.

NCICD is a public-private partnership to protect Jakarta from tidal flood by closing Jakarta Bay. It has changed plans several times including a plan to make it look like a giant bird called Garuda. The latest from the central government shows a plan with the outer wall attached to 17 artificial islands planned in a reclamation project.

The project of “normalisation” of the waterways is another unsustainable endeavour to manage flooding by widening and dredging rivers and clearing areas for beautification projects that do not target the real causes of flooding in the city. Water experts have said rapid development and the loss of water catchment areas as one of the main causes of flooding in Jakarta.

Despite the fact that all these projects have a harmful impact on the local population and that floods still happen after evictions, they attract investment. Jakarta’s government is betting on saving the city with costly, risky and unsustainable projects.

With these projects and investment, the future of the kampung residents is being gambled on the global trade market. This construction boom and infrastructure building has been accompanied by a rise in legally dubious and traumatic evictions of thousands of families from their homes and communities.

In 2016 alone there were 193 evictions (80 more than in 2015) impacting 5,726 families and 6,379 businesses. Many of those who lost their homes and livelihood were unlawfully and violently evicted, according to Lembaga Bantuan Hukum Jakarta (Jakarta Legal Aid Institute).

At the same time, the alternative housing provides a place only to a minority of the evicted families. The housing is also inadequate, expensive and often far away from any work or business opportunities. Many more evictions will happen and they will only exacerbate these problems.

A community makes a gamble

This is how Jakarta has forced to the gambling table the residents of kampung Tongkol, Lodan, and Kerapu as well as many other communities affected by the development plans. They are betting their livelihoods, social and family networks and economic prospects, not only to save their homes and communities but also to envision a more sustainable Jakarta. They want to present an alternative global vision of urban development.

Groups like the Urban Poor Consortium and the Anak Kali Ciliwung Community in Tongkol, Lodan and Krapu have stopped waiting for the government to recognise their land rights and have been busy with sustainable planning, urban design and infrastructure creation to increase the social and economic value of the kampung. The autonomous creation of services is nothing new but this anti-eviction work has reached a whole new level of creativity and vision.

To overturn the accusation that they are dirty illegal squatters, the residents of three kampung, local name for informal settlements, improved their kampung on their own. The improvement involved voluntarily slicing a section of their houses close to the Ciliwung Tributary to make more space for passage and activities. They did so, while using traditional and sustainable materials like bamboo to upgrade the remaining portion of these houses.

The three communities are also drawing attention to the existing archaeological ruins and working with artists to bring more cultural production to the area. They are undoing the common misconception that kampungs are slums by attracting visitors to their communities and producing local goods for sale.

This kind of work was only possible through capillary organising, participatory planning and by sacrificing much of what is needed for survival. Many researchers recognise the value of these socio-economic networks for a city like Jakarta. Supporting the work of Tongkol, Lodan and Kerapu is not simply a human rights effort, it is important because they contribute to a new vision of a megacity that gains value from sustainable housing, zero waste production, and small-scale, flexible economies.

This recognition has led scholars from a variety of local and international universities to bolster this work with research and expertise. These interactions are deeply enriched by knowledge exchange between local communities and the scholars. A variety of NGOs and organizations from civil society are also interested in acknowledging and seeing this work scale up to include other kampung.

Granting land tenure to the urban poor could turn these efforts into a well-organized experiment in bottom-up urban design. It would make Jakarta a leader in countering the global trend of expelling vulnerable populations from the core of society, which sociologist Saskia Sassen documents in her in-depth study of the global economy.

Unfortunately, those in power still prefer to sit at a gambling table where the cards are marked and the odds are set against the urban poor. It will take more pressure from public opinion to lead the government to see the value of a land tenure reform.