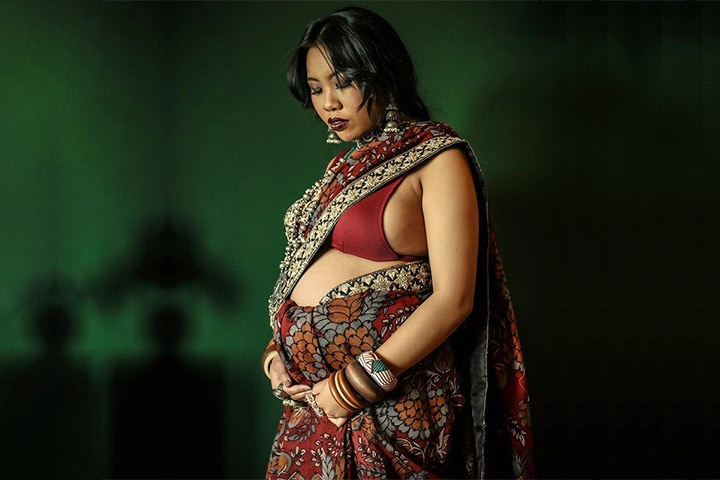 When it comes to women and their choice of clothing, everybody’s nose seems to be up in our business. Right from educational institutes deciding what’s appropriate and what’s not by implementing dress code for girls, to people now deciding how pregnant women should dress with a bump, nobody is spared from people giving their two cents of opinion on everything under the sun. While we have seen people warming up to the idea of celebrities flaunting their third-trimester bumps in magazine covers, people are still averse to pregnant models posing with the bump.

Recently, designer Ayush Kejriwal posted a picture of a pregnant model with an evident baby bump in a beautiful Kalamkari saree. The photo, however, did not sit well with his followers. People started commenting on how the blouse is a bit too revealing for a pregnant woman and what he intended by sharing the picture. Or to use a more subtle shade of lipstick instead of the dark one.

Sadly, it is hard for the Indian audience to accept a dusky pregnant woman flaunting her baby bump. We wonder if the photo would have received the same amount of flak if it was a celebrity or a fair-skinned model with a skinny figure. Just a thought!

If you scroll through the Instagram page of the UK-based designer, you would find that the models on his page are real women with real bodies and skin tones. Unlike the ideal body shapes showcased by most designers, Ayush has managed to beautifully portray Indian women donning his garments in all its glory. Since the young designer isn’t alien to the idea of breaking stereotypes, he wasn’t going to shut up and listen to people leaving rude remarks on the model and how they think it should have been done. The designer uploaded a screenshot of the post shortly after his previous one. In his post, he wrote how his DM was flooded with messages and remarks all because he chose to use a pregnant model for one of his photo shoots. He questioned people’s reactions and condemned it strongly. Ayush maintained his stance and said that there is nothing wrong with a mom-be-be flaunting her baby bump. He continued by saying how it is easy to criticize someone by hiding behind a desk, but it takes a lot of guts for women to share one of the most vulnerable moments of their life with the world. 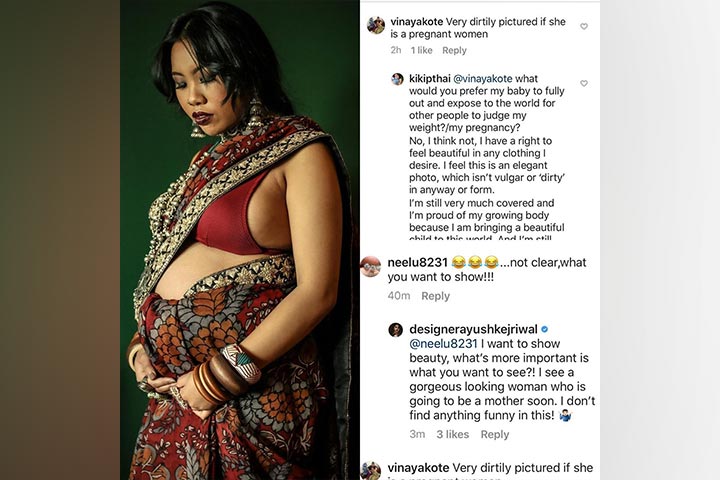 We have seen Hollywood celebs posing with their bump when they are heavily pregnant. Many celebrities have even done nude shoots. These photo shoots have received a much more positive response from the people since maternity shoots have become a trend in the West. This wasn’t the case always. Remember how the photo of a pregnant Demi Moore on the cover of Vanity Fair in the ’90s caused a stir, many calling it obscene. Times are changing for better and now people have become more accepting and loving towards the images of pregnant women and their bumps. 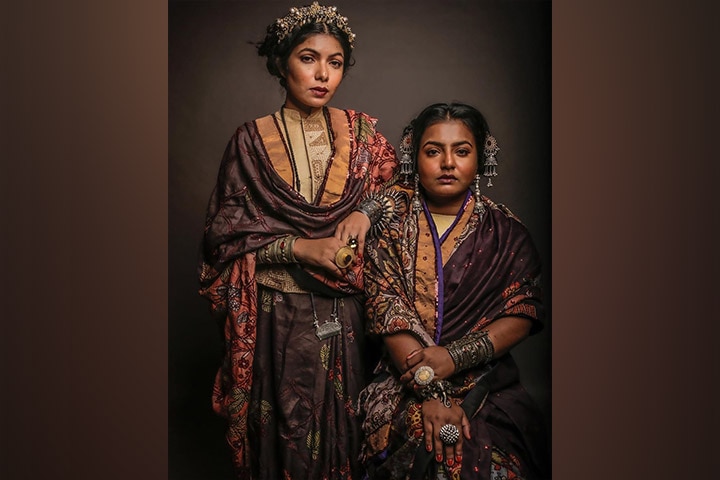 Even though we are living at a time where inclusivity is considered to be important, people are still unapologetically rude to models who do not fit the image of a perfect body and complexion, unlike the established actors and celebrities.

With celebrities such as Lisa Haydon, Celina Jaitley, and Konkana Sen Sharma proudly flaunting their baby bumps, we hope it paves the way to women feeling confident in their body and skin tone without so much of a thought about others opinions. And if such a time does come, the cosmetic, fairness creams and several other beauty industries would take a major blow who are feeding off of women’s insecurities.