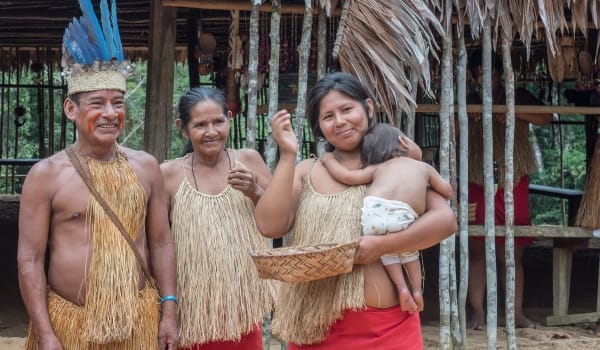 Latin America – Inside the community center in the village of Roya, deep in the Peruvian Amazon, scientist Dawn Rodríguez-Ward hangs pie charts and graphs, as she prepares to present results of a recent study underway in the district.

The villagers, members of the indigenous Shipibo Konibo tribe, trickle in from the Amazonian heat, and crowd together on the rows of wooden benches. Men mainly fill the front rows; women sit farther back.

Once her presentation is complete, Rodríguez-Ward invites her audience to comment. Far more men than women stand up to ask questions and offer opinions.

This is not unusual, according Rodríguez-Ward, who works for the Center for International Forestry Research (CIFOR).

In communities like this one, she says, men and women often participate differently in village meetings and development projects, just as they do in everyday tasks.

As part of a global comparative study conducted by CIFOR and its partners at 23 sites in six countries, Rodríguez-Ward led a team to gather data about forest use and livelihoods, before and after the implementation of a REDD+ project. Analysis is ongoing, and full results are expected in the coming months.

One thing they noticed is that while both men and women depend on resources gathered from forests, rivers and lakes surrounding the communities, they use them differently.

“Men are generally the hunters and fishermen, and are more involved in forest management in communities,” Rodríguez-Ward says.

“Women are more likely to gather fallen branches for firewood, and to collect medicinal plants and seeds, bark and other materials to make clothing and handicrafts.”

She says when it comes to community decision-making, women often participate to different degrees, or in different ways.

Interventions to shift some of these dynamics include work by the Asociación para la Investigación y el Desarrollo Integral (AIDER), a Peruvian non-profit organization that, over the past decade, has run several community development, handicraft, education and forest-management projects in this area of the Ucayali River Valley.

AIDER encourages women to participate equally with men in activities and community decisions, says Pío Santiago, who coordinates the organization’s work in Ucayali.

“As a result of those efforts, there has been much greater participation, not just by women, but also by older adults and young people,” Santiago says.

Over time, Santiago says, more women have won election to leadership positions in their communities or to roles in regional and national indigenous organizations.

The issue of participation poses challenges both for managers of development projects and for researchers, according to Anne Larson, a principal scientist at CIFOR.

“If someone starts a project and fails to understand the underlying differences in how people use forests, they can end up causing unintentional harm or reinforcing problematic relationships of power in the community,” Larson says.

“If you don’t understand the rules, you could end up taking land that women control and turning it over to men.”

If you don’t understand the rules, you could end up taking land that women control and turning it over to men.

Women and men do not always realize that they use forests differently, Larson says, and management decisions must take all those uses into account.

“They don’t necessarily think about it,” she says. “And you can’t just assume that people are going to be able to explain the complexities of how this affects power relationships.”

Women’s participation in community decision-making is just as complex, according to Larson.

Even when women speak up less, or appear to have less of a voice, she says, “it’s too simplistic to say women don’t participate, are never heard and don’t get what they want. We should never assume women aren’t participating at all.”

Women will often say they feel they have the power to influence community decisions. In some cases, they say that often happens through their influence on their husbands.

Guidelines for REDD+ projects include safeguards to ensure women’s participation, but that is usually limited to participation in meetings, Larson says. It doesn’t take into account women’s involvement in the use of the resources or the sharing of benefits from the project.

Changing levels of women’s contribution in the public sphere, such as community meetings, can have repercussions in their private lives – including domestic violence, Larson says.

“If you really want to have an impact, you have to engage with the community deeply, for a long period of time, in culturally sensitive ways that make sense in that community,” she says.

This post was previously published on forestsnews.cifor.org and is republished here under a Creative Commons license.