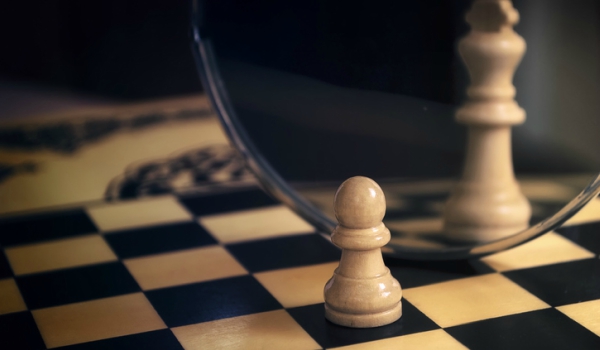 INTERVIEW with Laurent Ledoux. The abolition of hierarchy, the secret of a successful and successful company? The egos, starting with that of the leader, often come to spoil the party. Because to give more power to its employees and really transform its business, learning to “let go” is essential. Meeting with Laurent Ledoux, former president of the Belgian ministry of mobility, former director of public banking at BNP. This 52-year-old Belgian, a “transformative manager” close to Frédéric Laloux and Isaac Getz, recently launched Phusis, a cooperative that supports the leaders of large groups in their transformation.

How do you assess the “liberation” of companies today in the world?

Laurent Ledoux: If there is today a real awareness, which manifests itself notably through growth in “collaborative” management of 3 to 8% between 2013 and 2016 (cf. The How Report ), there is still a long way to go…

The main barrier to a generalization of these models is to be found on the side of the leaders ‘ ego. The transition required by the transition to a “liberated” (Getz) or “opal” (Laloux) type business requires being in a process of letting go, delegation, openness, participation and decision-making in common; which is not within everyone’s reach. This paradigm shift, which challenges traditional control and hierarchy, requires significant work on oneself. At Phusis, we only work with companies whose boss or boss is already on a path of personal transformation.

What attitude should be adopted for enlightened leadership?

LL: In a Western conception, inherited from the Greeks, the effectiveness of a strategy consists in achieving the objective one has set oneself by removing obstacles with the least possible resources. Chinese philosophy considers efficiency in a very different way: it is rather a question of letting the effect (which occurs naturally) impose itself as much as possible and lead to a result that can suit us, intervening as little as possible…

By working on himself, his fears, his anxieties, his desires and his self-esteem, the true leader can, therefore, create harmony as well as the conditions necessary to bring out the best in people and organizations. Thanks to his empathy and his lucidity, he knows when and how to withdraw, lead or follow. He has the ability to focus and identify when an action is directed by an individual or collective intention. In some cases, the leader is the one who can best contribute to the advancement of the group and he must therefore also know how to put himself forward.

Human beings think of themselves as individuals separate from the rest of Nature, but that is only an illusion.

Few of the teams are made up entirely of people with a “Teal” level of awareness (Opal – Cf Laloux). The leader must therefore first assess the level of consciousness at which he and his team are located. This in order to be able to optimize, step by step if necessary, the collective elevation towards higher levels of consciousness.

The different levels of consciousness according to Ken Wilber: 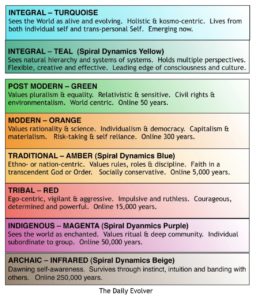 What vision of the world does this new paradigm fit into?

LL: The philosophical “tradition” in which I subscribe goes from pre-Socratics to Marcel Conche via Spinoza, Lao-Tzu, Omar Khayyam, Karlfried Durckheim … It can be summarized as follows: any human or animal being, anything, is only the form that Nature takes temporarily and fleetingly at a given point. Human beings think of themselves as individuals with an independent reality, separate from the rest of Nature, but this is only an illusion. Our ego, our mind overloaded with preoccupations is often at the origin of this disconnection with others and with this “all of reality” which we call Nature (the “Phusis” of the ancient Greeks).

Integrating this vision as a manager means increasing your ability to let go and empower your employees. It is sometimes difficult to realize it but the simple fact of consciously breathing can help us to reconnect to this inner peace as well as to others and to Nature.

What about financial results and the report to shareholders?

The pursuit of profit maximization blocks this alchemy of unity that allows groups to achieve extraordinary things, which allows selfless engagement. And we realize the following paradox: as we truly pursue a more noble goal, profit generally grows more than expected. However, this is not done in a mechanical and certain way, hence the need to let go. 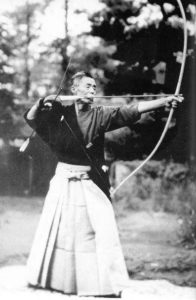 “Aim for harmony and reach the target in addition” Master Awa

As a leader, what kind of difficult decisions do you face?

LL: In the dynamic spiral theory (according to Graves or Wilber), the Teal level (Opal) integrates the different lower levels. “Opal” is one who knows how to integrate the participative as much as the competitive, the directive, even the aggressive.

The ability to play with the palette of all levels of consciousness is essential in order to be able to adapt according to the circumstances. This sometimes requires strong and non-participatory positions which make it possible to avoid the soft consensus which does not advance the group.

Certain decisions may, therefore, seem autocratic and it is important to accept it because this step is necessary to ensure the path of transformation. And this, especially at the beginning because it is indeed very difficult to overturn this hierarchy in a participative/concerted way. The spirits are not or do not yet feel ready (fears, fears or disbeliefs).

Is “opal” the one who knows how to integrate the participative as much as the competitive, the directive, even the aggressive

For example, Ricardo Semler, emblematic figure of this management, dismissed the entire management team of Semco when he inherited his father’s company. The spiritual journey of the manager facilitates, in my opinion, the crossing of this rougher period, both for the collaborators and for the manager himself.

What is the key for a manager on the road to transformation?

LL: Self-esteem (or peace according to Will Schulz) is the key because it allows you to free yourself from the desire to please. Personally, the philosophical reflection carried out with this laboratory that is Philosophy & Management, my initiation to Zen Buddhism and certain readings (in particular the works of Marcel Conche, Pierre Hadot, Michel Random, Jacques Castermane, Ronald Heifetz, Joseph Badaracco and so many d ‘others) helped me to distance myself and detach myself from these imperatives that one can feel when one is a manager. My personal and spiritual journey allowed me to face my fears a little more and to work these concepts through the body, the guts as much as the head or the spirit.

Act without fear of failure or desire to succeed.

All of these have helped me progress in this slightly healthier self-esteem: being happy to live the life I live. Act simply according to what the situation requires, without being obsessed with success or the end result. A wisdom that we can approach but that we never acquire definitively.