“Hey, Kiddo” is a graphic memoir that tells the story of Jarrett j. Krosoczka. The subtitle gets to the meat of the story: How I lost my mother, found my father, and dealt with family addiction. 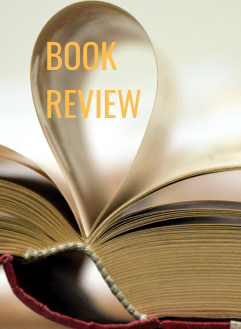 Hey, Kiddo is a graphic memoir that tells the story of Jarrett J. Krosoczka from the time he goes to live with his grandparents until he graduates from high school. The subtitle gets to the meat of the story: How I Lost My Mother, Found My Father, and Dealt with Family Addiction.

The book is told through Krosoczka’s eyes as he loses his mother after she goes to prison, though he doesn’t know why, and eventually learns who his father is. He describes his grandparents as very old, having lived through the depression, and smoking two packs of cigarettes a day. They also often drink heavily are a bit gruff, though are loving to him.

Since it is told through his point of view and what he knew at the time, we don’t exactly find out why his mom went to prison, though there are pictures showing what he learned about the circumstances later. We also learn that she is a heroin addict and there are references to it throughout the book, often through other characters or to what the family reads in the paper after she suffers an overdose or is arrested.

He wrote the book for teens who may have lived through similar circumstances, but I found the book to be pretty sad and rough at times, so I’m not sure how a teen would read it. The moments that touched me the most were those between Krosoczka and his mother. There were numerous times when she didn’t show up for him as planned and I found those heartbreaking. It was also heartbreaking when they were together, as the relationship was odd after being apart for so long. 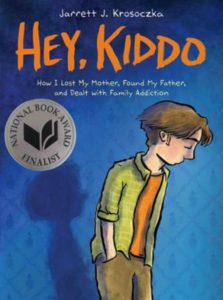 The book does provide hope in the form of Krosoczka’s father, who he only learns the identity of at age 15. They meet when he is 17 and the epilogue tells us that they were able to have a relationship along with his two children.

The memoir also focuses on how Krosoczka became an artist and how it saved him. It details the first-class his grandpa paid for him to go to, how his mother and he sent drawings back and forth to one another, and how he drew to amuse his friends in class. The book includes these drawings letters and other mementos from his childhood. The chapter breaks use the pattern from the pineapple wallpaper from his grandfather’s house. 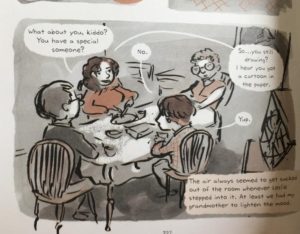 This is a book I wouldn’t normally read. It’s a teen book and a graphic memoir, hey_kiddo_insidebut I really enjoyed it. I first heard an interview with the author on Fresh Air and I was so moved by his story I wanted to read it. I have tried to read graphic books before but have trouble finishing them. This one really gripped me. The style is very casual with limited colors and burnt orange accents, an homage to his grandfather’s touch of style and use of pocket squares.

After reading the book I watched the Krosoczka’s TED talk which he did before the book was written and ultimately became the inspiration after people reached out to him and told him how his story was their story. I was moved by these points: