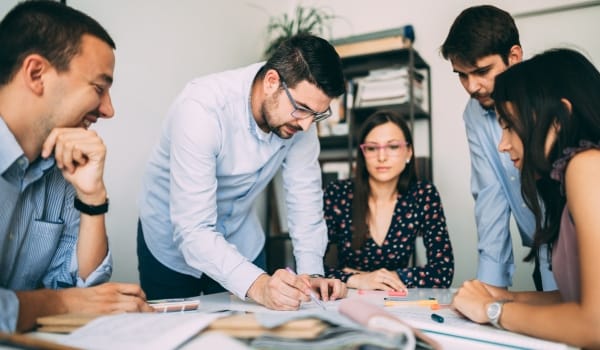 —
Adelante Latina is the first and only teen pregnancy prevention program in Cutler-Orosi and surrounding towns. Maria Guadalupe Diaz Rojas, a program graduate who is now a community college freshman and a returning peer leader, speaks with the class about self-image and aspirations. Photo courtesy of Latino Commission/Adelante Latina.

Drive fifty miles southeast of Fresno through countless acres of blooming almond and pecan orchards, and you’ll come upon the little town of Cutler-Orosi. A farm settlement largely unchanged by the decades, it moves to the rhythm of the surrounding crops.

Its residents are mostly Latino farm laborers and their families, and as they move up and out, the town’s population of 5,000 is replenished by new arrivals from Mexico, a timeless cycle matched in dozens of little towns across California’s Central Valley.

But there is one way in which Cutler-Orosi is remarkable. At a time when teen pregnancy rates have been dropping across California, the rates in Cutler-Orosi and surrounding Tulare County are consistently among the highest in the state.

For the daughters of migrant workers, the factors that influence whether they become pregnant can be very different from those affecting their urban and suburban counterparts. Often there are language barriers affecting their ability to learn about safe sex as well as connect with English speakers in the community. Many girls cope with being de facto first-generation Americans, navigating a U.S. high school while their parents remain steeped in the values of the old country. Since their parents often leave for work as early as 4:00 a.m., many teens are left alone a great deal, with many preparing younger siblings as well as themselves for school.

“One in fourteen girls between the ages of fourteen and nineteen will become pregnant here (Tulare County),” says Debra Camarillo, executive director of the San Francisco–based Latino Commission, which for the past two- and-a-half- years has pioneered Adelante Latina, the first and only teen pregnancy prevention program in Cutler-Orosi and surrounding towns. “And by nineteen,” Camarillo says, “many will have two kids.” The ramifications of such pregnancies are considerable. Teen moms are more likely to drop out of school, lack skills, and receive public assistance. “It shapes the entire challenge of these kids’ lives,” Camarillo says.

For The William and Flora Hewlett Foundation, which funds the Latino Commission’s work in Cutler-Orosi through a grant to the Fresno Regional Foundation, the innovative, effective Adelante Latina program advances its strategy to expand and improve direct services for teen pregnancy prevention in the Bay Area and Central Valley, particular among low-income youth.

“This is a case of bringing pregnancy prevention services to a location where there weren’t any and seeing what the impact can be,” says Peter Belden, the officer in the Hewlett Foundation’s Global Development and Population Program who manages the Fresno Regional Foundation grant. “The program is still in its early stages, but to date it has been a ringing success.”

The Latino Commission’s Camarillo says not one of the thirty-six girls who completed Adelante Latina’s twelve-week program has become pregnant, and all have graduated from high school and started college. Last year, the organization added a comparable program for boys, who are taught complementary lessons about how to treat girls with respect, use contraception, and avoid sexually transmitted diseases. Currently there are more than fifty teens on the waiting list for each program. “There’s a huge demand,” says Camarillo, who notes that most of that is created by word of mouth.

At the start, the Latino Commission didn’t envision a teen pregnancy program at all. The organization had come to Cutler-Orosi to open a resource center to help men with methamphetamine addiction, another signature problem in the Central Valley. But Camarillo says they soon realized that the community was reluctant to use such a facility. At the same time, significant numbers of local mothers kept appearing at the center saying that their daughters were becoming pregnant and asking for advice on how to prevent this. A new mission was born.

Designing a Program with Migrant Workers’ Children in Mind

It took the Latino Commission nearly two years working with the Fresno Regional Foundation and other prospective funders to develop a teen pregnancy prevention program that the funders were willing to support. But the success of what they devised was amply worth the time.

Starting in 2010, about thirty girls began meeting at the Cutler-Orosi family resource center, Nuevo Comienzo, through which the Latino Commission feeds and clothes more than 1,250 families annually for Tulare County. The girls met twice a week for three hours for twelve weeks. Crucially, in addition to talking about HIV, pregnancy, drugs, and dating, they discussed their self-images and aspirations, their cultures and families. With the girls’ meeting up and running, the organization took on perhaps a tougher task: getting a boys’ group started to do the same.

To focus discussions and give both groups a goal and resolution, each twelve-week session leads up to a presentation by the participants about some aspect of what they have learned. These creations have included short videos and other media that explore getting into community college, talking to boyfriends, and other issues teens face in their lives. According to the program’s leaders, these presentations serve as another tool for participants to think through their actions before they face challenging situations.

Recently, a group of current and former Adelante Latina participants gathered to discuss why the program—whose name roughly translates as “Women Forward”—has been important to them.

Hearing from Cutler-Orosi Teens about the Program’s Impact

“It gives us an opportunity to talk about making our dreams come true and think about the obstacles to reaching them,” says Maria Guadalupe Diaz Rojas, a program graduate who is now a community college freshman and a returning peer leader.

Recalling her own experiences in the program, she says, “We talked and I wondered: why do these people believe in me? They teach you that you can do what you set out to do. Self-esteem is a big issue with these girls. Most of the girls who get out of here do it with the power of their minds.”

“Here we can ask questions that we’d be afraid to ask our parents,” says Juan, fourteen, the son of migrant workers who came to Cutler-Orosi with their children four years ago from Zacatecas in central Mexico. In any event, he says, parents often have little awareness or understanding of the world their children face and are of limited help in guiding them through it.

“It’s all on the kids,” agrees another boy, Pedro. “I couldn’t talk to my parents about a lot of this stuff [contraception]. It’s too embarrassing.”

Executive Director Camarillo says the program also includes a component on domestic violence, in part because relationships between recent immigrants commonly involve significant disparities in age and, consequently, a disparity in power between girls and men: “Some of them try to control the girls.”

Adelante Latina is nearing the end of its two-year funding cycle, and Camarillo says the Commission hopes to expand the program, perhaps adding a component for its graduates. “The cry from the parents is to make it longer,’’ she says. Other possibilities are to add after-school care, increase parents’ involvement, and perhaps establish a presence in the high school.

“We recognize how hard it is to sustain change in the community,” she says. “But if we want to say we are a responsible society, we have to recognize the reality of teens’ lives and help them learn how to deal with it.”

This post was previously published on hewlett.org and is republished here under a Creative Commons license.