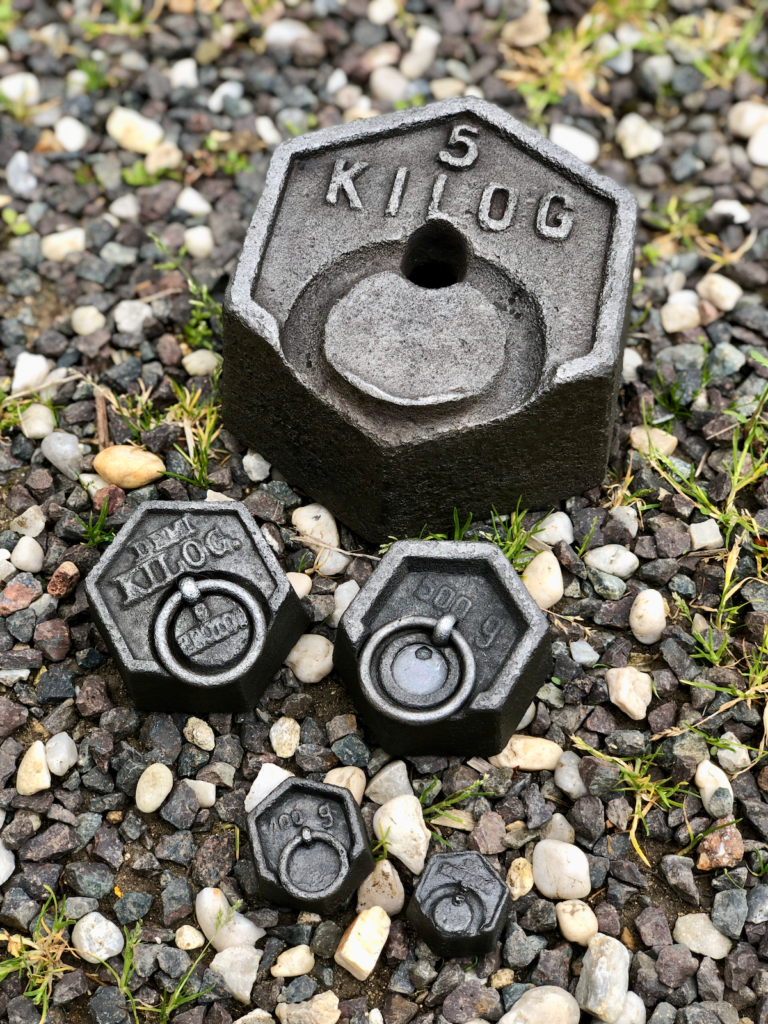 When we were clearing out the garden shed, we found some old cast iron weights — they were crusted over with vinegar. We didn’t know what they were for, but we thought they were cool and decided to attempt a de-rusting.

It was a success! You can see the restored cast iron weights above, and we also restored some tiny brass weights too. Plus, we learned what the weights were originally used for.

This is how the de-rusting/restoring process went: 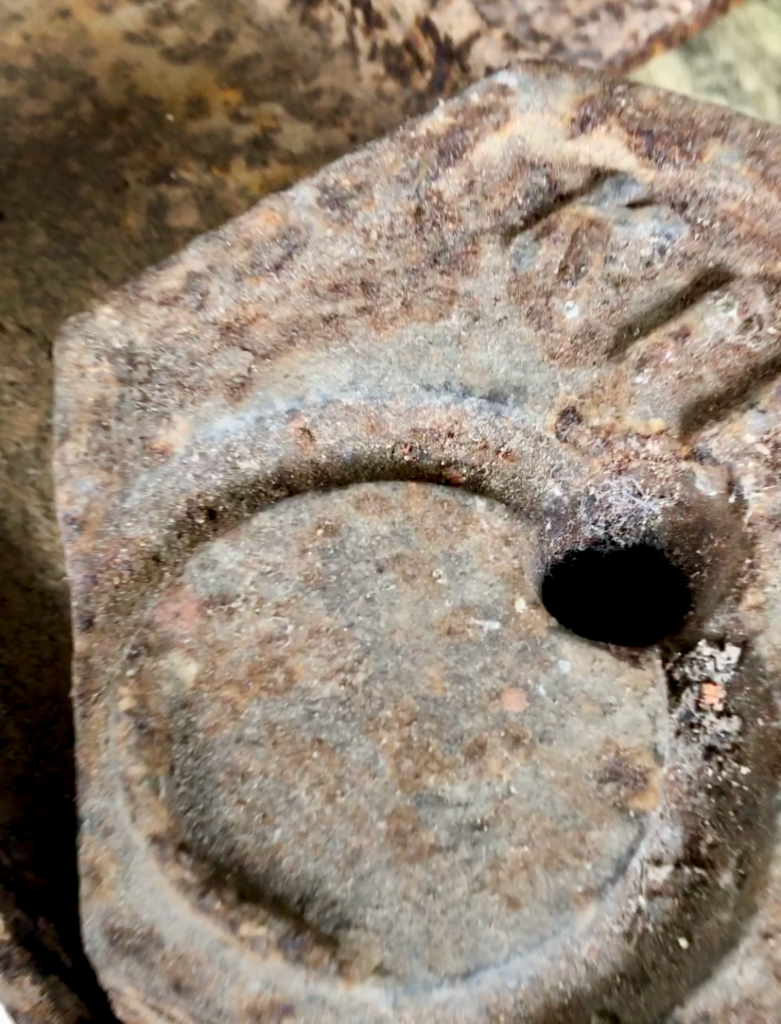 The cast iron weights were completely crusted with rust and grime. Who knows how long they had been hanging out in the garden shed. 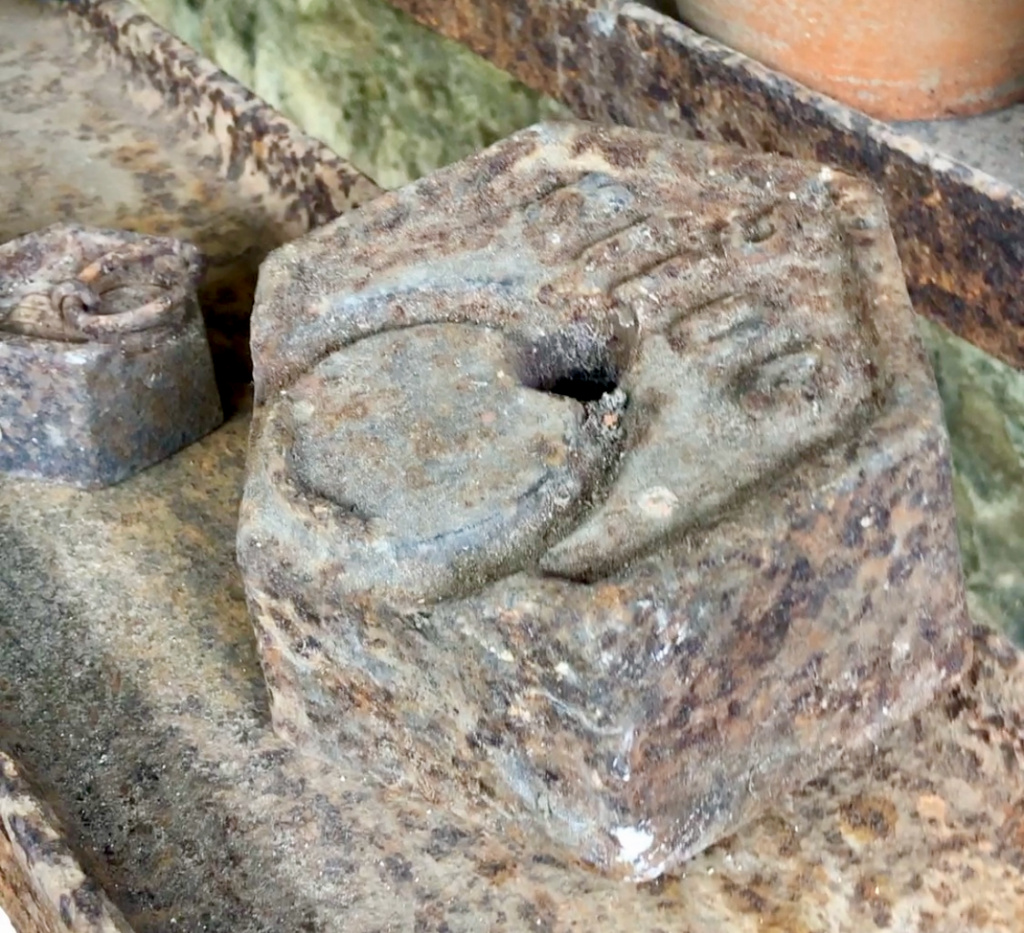 At first we thought there were just two of them, but as we cleared out the shed, we found three more cast iron weights (for a total of 5), and 3 brass weights. 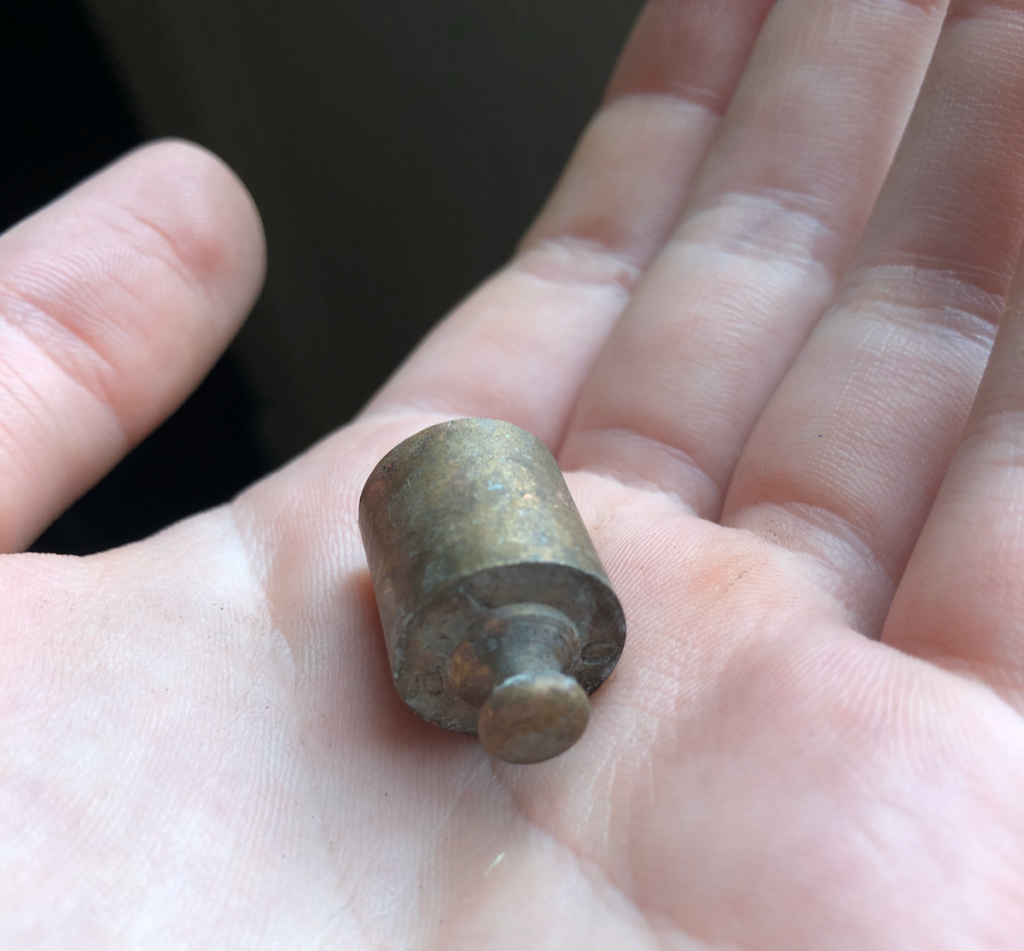 The brass weights were tarnished, but they weren’t in nearly as bad a shape as the cast iron weights.

We decided to focus on the cast-iron weights first. I went straight to YouTube and started learning about different de-rusting processes. There are a lot of different options, but several talked about how effective simple white vinegar is — plus it’s non-toxic and we already had some on hand.

So we grabbed an old plastic bucket with a lid that we also found in the garden shed, and covered the cast iron weights with a layer of vinegar. We let the weights soak for five days and would check on them each morning. Eventually a sort of loose crust formed and the vinegar turned very, very dark. It looked pretty gross (if you want a peek, check out my Treasures Highlight for video). 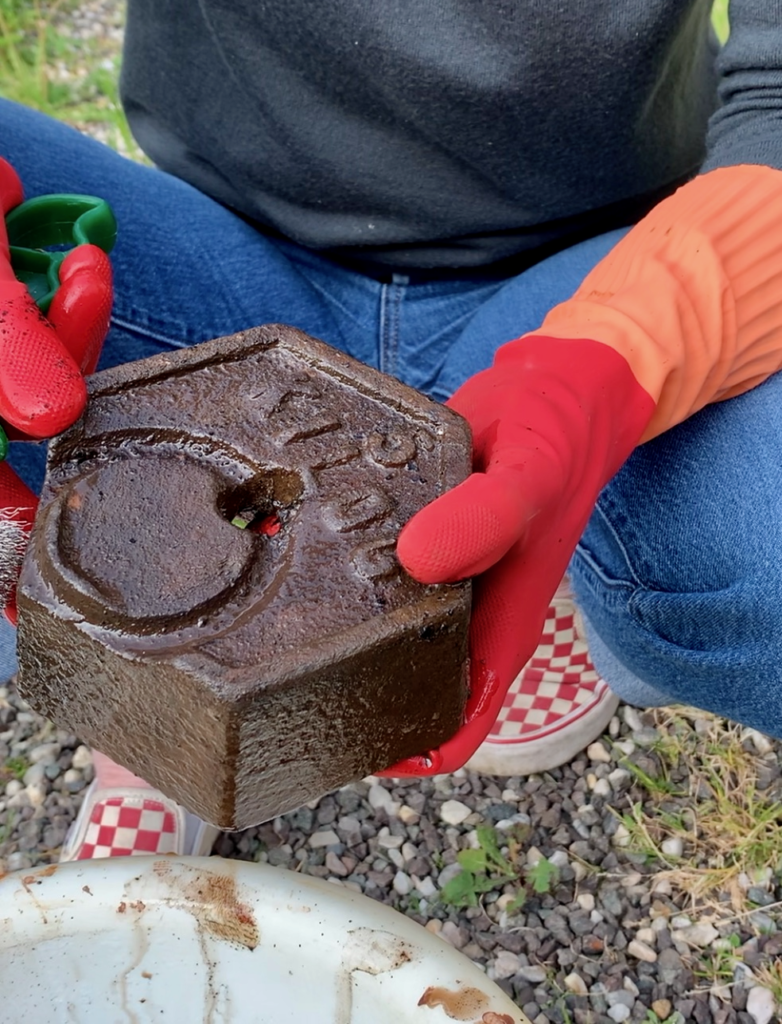 After five days we pulled the weights out of the vinegar and they were already much improved! A lot of the rust and grime had dissolved. We gave them a light scrub with a metal brush and they looked like this: 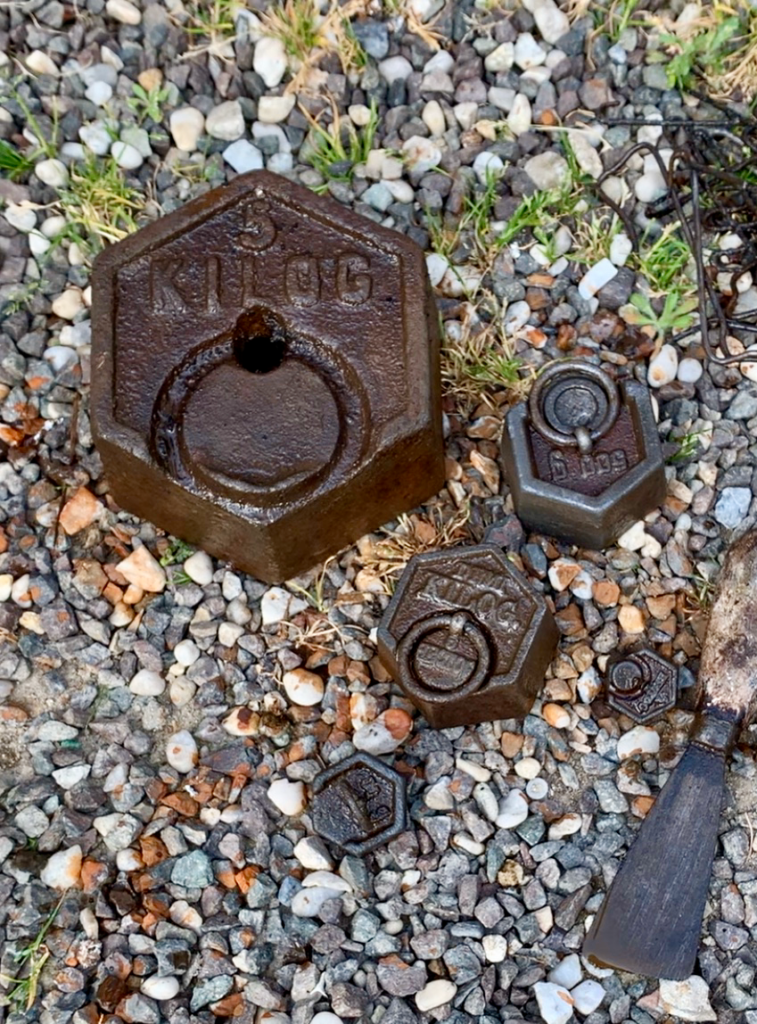 Definite progress! But still quite a bit of rust. So we decided to soak them again in with new vinegar. This time, we let them soak for 48 hours, then we pulled them out and gave them a much more thorough scrubbing.

When we were done with that more intense scrubbing, and had gotten off all the loose rust we could (it sort came off like wet, red sand), the weights looked like this: 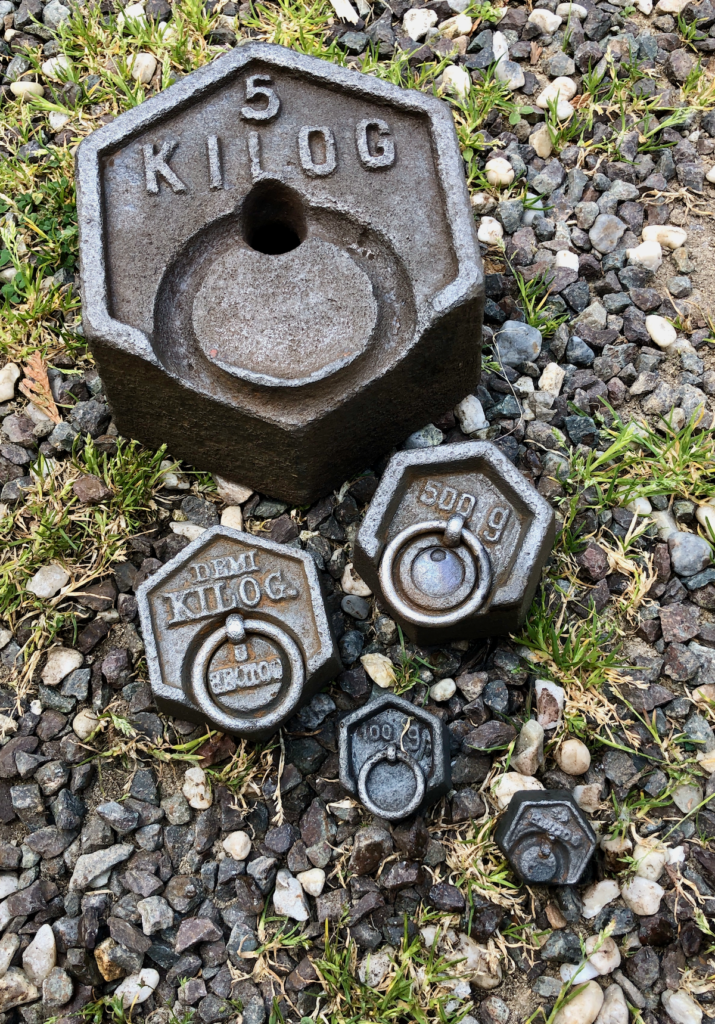 But still, you can seem some bits of rust. So we decided to do one last vinegar soak to hopefully loosen up any remaining rust. This time we soaked the weights for 24 hours, and again, used new vinegar. 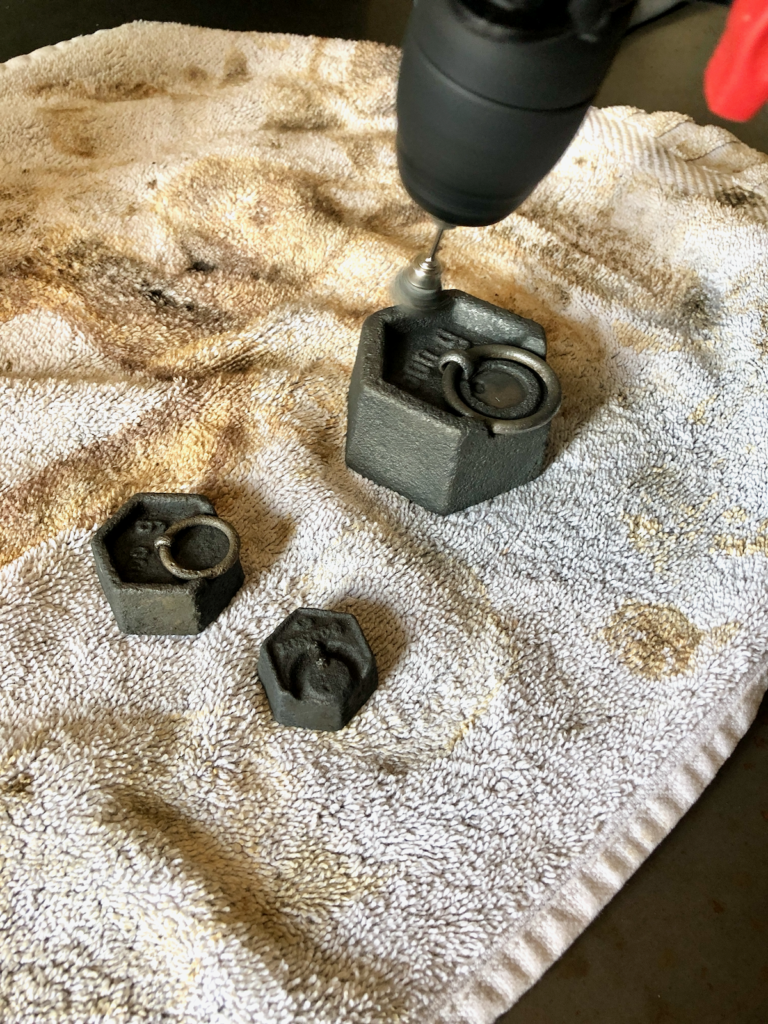 After the 3rd vinegar soak, we pulled out the weights and used a tiny wire brush attachment and our drill to give them one last scrub. The brush was so tiny — it was perfecting for all the little details.

Before that last power-scrub, I thought there was barely any rust left, but take a look at that towel. It was plain white when we started! So apparently there was more rust in the corners and crevices than I realized.

After the final scrub, we put the weights in the oven for a few minutes, just to make sure they were totally dry, and then we oiled them (the same way you might oil a cast-iron pan), to protect them from further rust.

Here’s how they turned out: 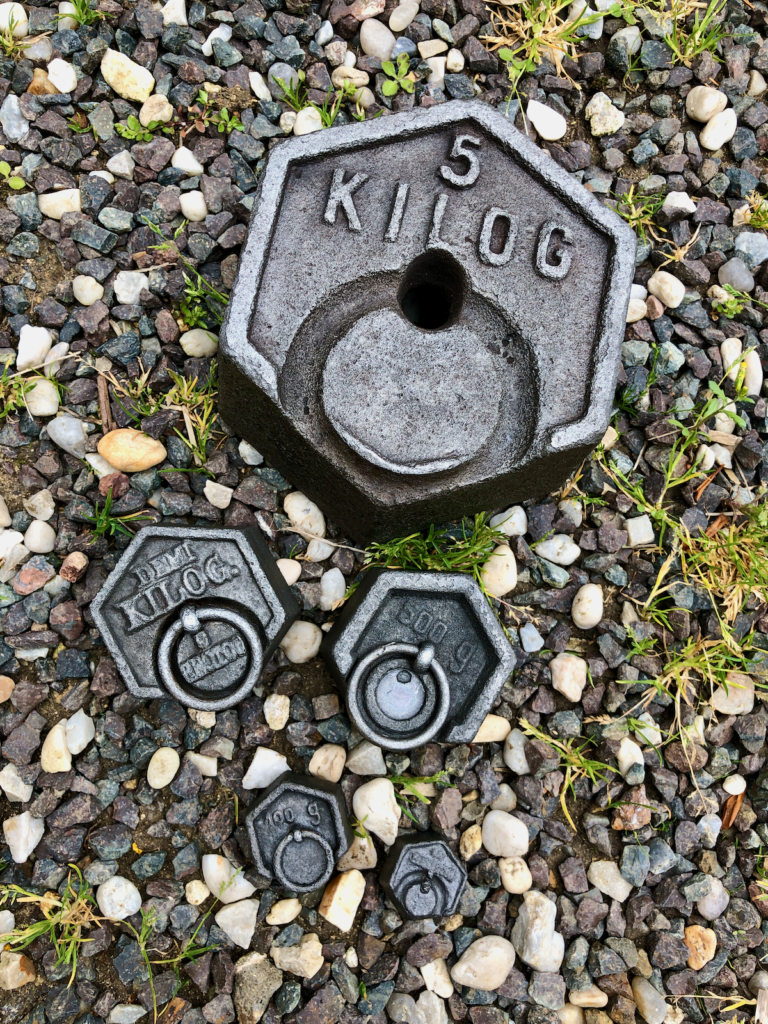 For the brass weights, it was a much simpler process. First we soaked them in ketchup for an hour. Ketchup was recommended by Bob Vila — and tomato sauce or tomato juice would work as well.

Next we rinsed off the ketchup and polished the brass weights with a microfiber cloth. They shined up beautifully: 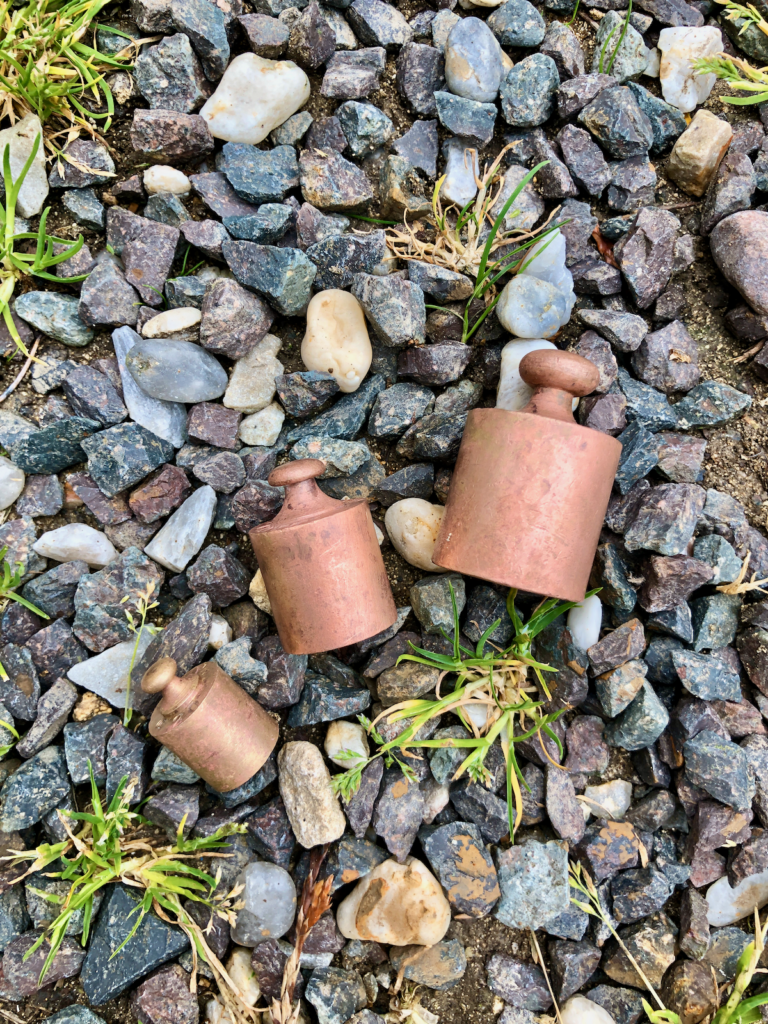 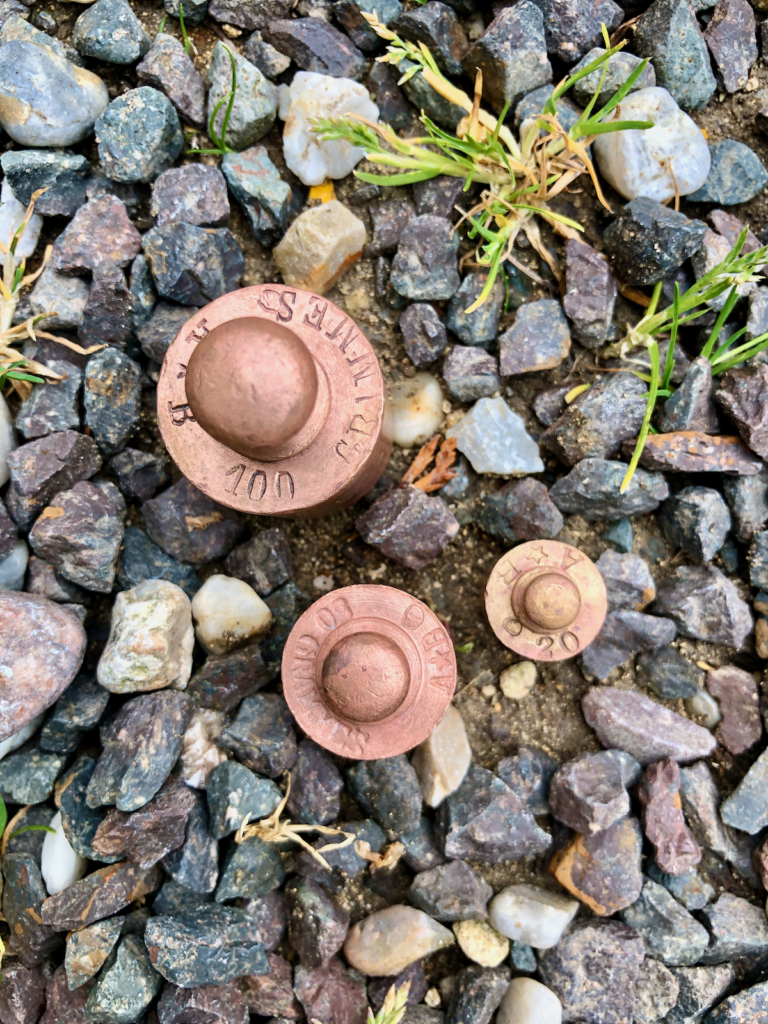 I think they’re so pretty!

While all this restoring was happening, I started doing searches for “vintage french cast iron weights” and “vintage french brass weights.” I learned that these types of weights came as a set and were used to weight produce and spices and that sort of thing. When I started talking about the weights on social media, French friends would tell me about playing “shopkeeper” with the weights when they were kids — apparently they were a fairly common household item.

In fact, I was also told that if we keep a lookout at vide greniers (community garage sales), that we will be able to find more of these quite easily. Maybe we can make a collection or build out a set. Betty is especially charmed by the brass ones, and I think it would be fun to hunt for more with her.

I’m curious, have you ever used vinegar as a rust remover? I can’t believe how effective it was! Last time I went shopping I noticed the white kitchen vinegar was available at an 8% concentrate and a 10% concentrate — but there was also a “cleaning” vinegar that was available at a 14% concentrate. If I was doing this again, I would definitely go for the strongest concentration. For our next vinegar-rust project I’m going to use crumpled up tin foil dipped in vinegar to get a bit of surface rust off one of our old bikes.

I’m not sure what we’ll do with these weights — maybe just use them as paper weights — or the big one as a door stop. But I do know that I’m so grateful for mini-projects like this among the big house projects. With the house, we don’t get that “finished” feeling very often — so much of the work is ongoing. So it’s nice to have something that feels complete, finished, and marked off our list. Especially something that turned out so handsome!

How do you feel about projects like this? For you, would it have been worth the time and elbow grease to restore these weights? Or would they have gone straight to the junk/trash pile?