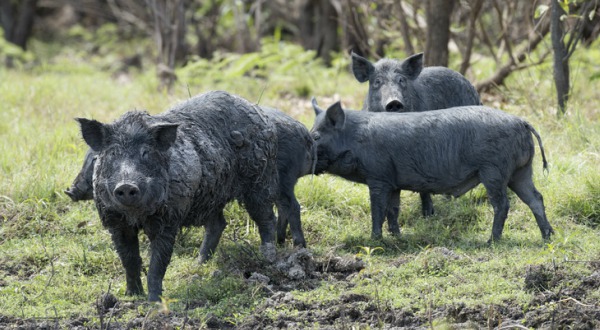 So far I’ve only written about human systems and the unintended consequences that arise from them. But the “natural world” is complex also. We are just beginning to understand the interconnections of living and non-living things. Environmental ecosystems can also be pushed in one direction or another by human intervention and other activities. That means plenty of second-order effects.

Ecosystems are often complex beyond our ability to appreciate them, but on the surface, they can seem simple. Maybe this is why there have been so many attempts to alter ecosystems by adding to them or subtracting from them. The impact of those additions or subtractions can tough to know in advance, but the impact can be estimated and controlled. Beyond intentionally changing an ecosystem, there are also all of the non-human changes that occur.

There’s a blurry line between invasive or introduced species and native or indigenous species. To be counted as invasive or introduced, there needs to be human intervention — a distinction without a difference if the result ends up the same. Species move around the world on their own all the time (wind, sea, on or in the bodies of their hosts). Then there are gray areas, such as species that navigate to new environments by floating on plastic in the ocean. They can hitch a ride on floating material that is only there because of human activity, but it wasn’t humans who brought the species to any specific place.

While it might seem odd today to intentionally introduce and spread species from other parts of the world, in the 1800s, this interventionist attitude was common in acclimatization societies.

From a “Lecture on Acclimatisation” in Australia: The societies were about “the acclimatization or art of introducing the Mammalia, birds, fishes, and insects into countries to which they are foreign, utilizing them in places where they were formerly unknown, and in such congenial localities as may conduce to their being reared and propagated with success — thus reducing our scientific knowledge to useful and practical purposes.”

Two factors encouraged this work. First, there were food shocks felt around the world, including for example the effects of the potato blight in Ireland. One idea supporting species introduction was to lower the risk of dependence on only local foods.

The other factor encouraged — or at least that didn’t stop — these societies is the lack of understanding of the risks they were creating. It was apparently rare in these societies to debate the impact species introduction might have on local ecosystems and how to introduce species in a controlled manner.

Here are ways that ecosystems change by the addition or subtraction of just one species.

Intentional introduction for food. Rabbits in Australia. Feral pigs in the Americas.

Introduced as a food source in the 1800s, rabbits have caused ecological damage by multiplying so quickly that the food they ate depleted plant life and led to soil erosion. Rabbits in Australia are an example of just how fast things can change when a small number of fast reproducing, fast-moving, versatile animals are introduced into a suitable environment.

Rabbits can bread only in Spring and Summer in Europe, but year-round in much of Australia. They were a good candidate to cause environmental scaling effects in Australia. And they did. Rabbits are the fastest reproducing mammal in the world.

Multiple efforts to eradicate or control them, from germ warfare to a fence spanning the western part of Australia, have been unsuccessful.

Pigs were introduced into the Americas multiple times. First by Columbus, who brought eight pigs on his voyage to Cuba in 1493. Then by Hernando de Soto who brought 13 pigs to Florida in 1539. Apparently, by 1542 that pig herd grew to 700, not including those that escaped. Hernando Cortez brought pigs to New Mexico in 1600. Sir Walter Raleigh brought pigs to Jamestown in 1607. Pigs were even introduced from Europe as late as the 1930s. In some locations, the wild pigs are a nuisance with repeated attempts to eradicate or control their populations. So far, control has not worked. Feral pig populations can expand quickly, even with efforts at control. Generalist eaters suited for many different environments and too big for most predators, they are mostly considered a nuisance today.

Intentional introduction to combat another species. Cane toads in Australia.

Cane toads are native to Latin America but were introduced to Australia to combat a beetle that ate sugar cane roots. The Australian sugar cane plantations were themselves a new experiment. And the cane toads never did eat many of those beetles.

Native species in Australia, “unaware” that cane toads are also poisonous, die trying to eat them. Predators seem to be learning though. Some birds learned to attack the toads’ underbelly and avoid the poison glands on its back, while some snakes with smaller jaws (which don’t enable them to eat the large cane toad) succeeded in reproducing and passing on that trait.

Efforts at cane toad control include training potential predators like water monitors, quolls, and bluetongue lizards to avoid the cane toads by administering manageable amounts of toad, which convinces the would-be predators to stay away.

There was broad approval in the 1930s of the plan to introduce this species to Australia.

Intentional introduction as art. Starlings in the US.

It’s not every day that we can blame the Bard of Avon and his fans for an unintended consequence. But Eugene Schieffelin “hoped to introduce into North America every bird mentioned by Shakespeare.” He imported starlings from England and released them in Manhattan in 1890 and 1891. Starlings soon started to drive native birds out of their habitats, ate massive amounts of crops, and spread disease. By the 1940s, starlings had reached California. They now number in the hundreds of millions.

If you’re wondering, Shakespeare only mentioned starlings in Henry IV Part I. A list of all the other birds is here.

Accidental introduction. The brown tree snake in Guam and other islands in the South Pacific.

The brown tree snake, native to Australia and parts of Southeast Asia, was accidentally introduced into Guam. The theories are that the snakes hitched a ride on ships or aircraft landing gear after WWII. Guam was an easy location for the snakes to colonize quickly since the island didn’t have natural predators for them. What followed was the local or total extinction of many bird species, including the Guam Flycatcher.

Beavers went extinct in UK in the 1600s. A few years ago they were reintroduced into Scotland and England for reasons including flood control and beavers’ encouragement of greater species diversity in places they inhabit. When beavers were reintroduced, people revolted. But these releases have apparently been controlled and studied in the small scale and it looks like the reintroduction has (so far) been beneficial. Again, we’ll see.

The estimate is that there are 50,000 introduced species in the US (out of 750,000 species present here). The examples above are just a handful of the more noticeable ones.

Years ago someone told me a story about a big media company. They had to rip up part of the floor in one of their offices to make repairs and discovered a tangled mass of communications cables snaking underneath. What did they do? Replace and reconnect the cables? No. When they saw that tangled mass, they touched nothing down there and carefully replaced the floorboards. Who knows where each cable led and what content it carried? Better just to leave things as they were.

In a complicated system, unless you understand how your change makes things better, better just to leave things as is.

And if you want to read about a system falling apart in something as predictable as a pocket watch, see Mark Twain.