One of the longest US waterways, the Colorado River, has lost 20% of its flow since the year 2000, with the changing climate mostly responsible. 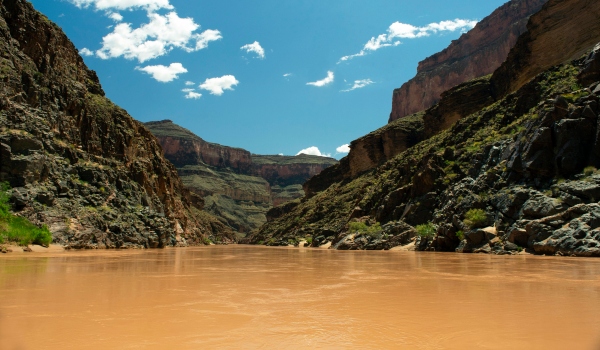 The Colorado River is dwindling, and climate change is officially to blame. In the first 14 years of this century, the flow declined to only four-fifths of the 20th century average, according to new research. The water lost would have been enough to supply two million people for a whole year.

Altogether, the river supplies water to seven US states and two in Mexico, and 40 million people rely on it for their water. But the entire Colorado River basin has been experiencing sustained drought since 2000. And somewhere between one sixth and one half of this liquid loss can be put down to global warming, scientists say.

They publish their findings in the journal Water Resources Research. “This paper is the first to show the large role that warming temperatures are playing in reducing the flows of the Colorado River,” said Jonathan Overpeck, professor of geosciences and of hydrology and atmospheric sciences at the University of Arizona.

“We’re the first to make the case that warming alone could cause Colorado River flow declines of 30% by mid-century and over 50% by the end of the century if greenhouse gas emissions continue unabated.”

His co-author Bradley Udall, a climate scientist at Colorado State University, said: “The future of the Colorado River is far less rosy than other recent assessments have portrayed. A clear message to water managers is that they need to plan for significantly lower river flows.”

The two scientists began by looking at the drought years of 2000-2014. The river starts with precipitation in the upper regions of its drainage basin, in Wyoming, Utah, Colorado and New Mexico.

They found that in the first decade and a half of this century, average temperatures in the region were 0.9°C higher than the average for the past 105 years. This is, very roughly, the temperature by which the globe has warmed on average over the last century, under a global warming regime driven by greenhouse gases emitted from fossil fuel combustion.

But there is another factor to consider. The US Southwest has a climate history characterised by intermittent megadroughts – periods of much lower rainfall over spans of 20 to 60 years.

Researchers have proposed that the risk of megadroughts is likely to increase in any climate change scenario. What actually will happen is uncertain, but the scientists are betting that as greenhouse gas emissions rise, so will the difficulties of water supply.

“Even if the precipitation does increase, our work indicates that there are likely to be drought periods as long as several decades when precipitation will still fall below normal,” said Professor Overpeck.

Dr Udall said: “Current planning understates the challenge that climate change poses to the water supplies in the American Southwest. My goal is to help water managers incorporate this information into their long-term planning efforts.” – Climate News Network

Previously published on climatenewsnetwork.net and is republished here under a Creative Commons license.
—