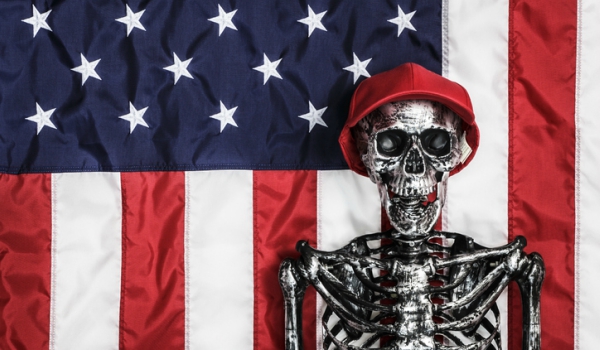 Racism would have been bad enough.

For Donald Trump to tell a person of color (or four in this case) to “go back where you came from” if you don’t like America under his leadership, would have sufficiently demonstrated the racialized demagoguery that has defined his presidency.

But amid the discussion of Trump’s latest demonstration of race-baiting, there is an even simpler problem with the President’s claim that criticizing America is tantamount to hating it and that one should leave before doing so.

Namely, those who criticize America for its shortcomings are the ones who genuinely love it, and this has always been the case.

Those who refuse to critique the country for its failings are the ones who despise America.

They are not patriots but cult members, blindly devoted to a piece of land upon which they were simply fortunate enough to have been born in most cases. But they carry within them not one iota of understanding as to the principles of the nation.

After all, America is an idea, not just a piece of real estate.

It is an idea that has attracted millions from around the world, even when the nation’s leaders have failed to live up to those principles, as has so often been the case — and as many of us believe the case to be still now.

Because even when a nation falls short, its potential is what inspires.

It’s like your kids. They may be pretty decent at 11 or 12, but what excites most parents is the potential you see in them to become something truly amazing. And if your children were still the same people at 23 or 35 as they were when they were pre-teens, you wouldn’t hesitate to criticize. You would push them, and not because you hated them — far from it — but because you knew they could be better, do better, and achieve a level of maturity not yet reached.

The same is true with nations.

Those who chant “love it or leave it” are poison to the idea of America, because they would never have pushed America to become in practice what it promised it was on paper.

Indeed, people like that never have, because such prodding requires critique and critique are seen as treason.

These are the kinds of people who would have been satisfied — were satisfied, in fact — with the system of enslavement. To condemn the founders for enshrining it in the Constitution or for owning slaves themselves in many cases would have been deemed insufficiently patriotic, and so the likes of these remained quiet.

This is why they attacked even Thurgood Marshall, the nation’s first black Supreme Court Justice, for daring to abstain from the bicentennial celebration of the Constitution in 1987. When Marshall noted, accurately and inarguably, that the document had been flawed at its inception because of its willingness to legitimize slavery and white supremacy, he was pilloried. Not because he was wrong, but because saying it supposedly demonstrated his contempt for the country he then served on its highest court.

Even as he admonished the country for betraying its principles, and insisted that the principles were what makes America special, he was condemned — condemned by people who hate and have always hated those principles.

These are the kinds of people who would have been satisfied with segregation, and second-class citizenship afforded people of color for most of the nation’s history. People who said “America love it or leave it” didn’t join the civil rights movement to push for change. Because to them, calling for change was tantamount to hating America, and so the likes of these remained quiet.

These are the kinds of people who would have been satisfied with children working in factories and mines, women not being allowed to vote, and companies being allowed to shoot striking workers, among other indignities. Because to condemn these things would have been seen as ungrateful for the majestic wonders of the American experiment, and so the likes of these remained quiet.

At every turn, those who deem themselves conservatives have opted to retain the status quo, whatever it happened to be at a given moment. And if that status quo left millions of Americans out of the American dream, so be it. They should suck it up and shut their mouths because to complain is to hate America.

But all of this is wrong.

Ask yourselves, truthfully, who really loved America more? The cops pictured here in Birmingham, attacking a peaceful demonstrator for daring to challenge racism? Or the man being attacked?

Who really loved it more? John Lewis, pictured here being arrested in Nashville for protesting racial injustice, or the cops arresting him and the white onlookers, most of whom supported his arrest?

Who loved America more? Was it these men: Andrew Goodman, James Chaney and Michael Schwerner, whom Klan-affiliated police officers in Mississippi murdered for daring to register black folks to vote?

Or was it these tobacco-chewing shit kickers — the guys who killed them and then sat back and laughed at their trial, proud of their murderous deeds?

To ask the questions is to answer them.

Those who remain quiet in the face of injustice and unfulfilled promises are the ones who detest the very idea of America. They do not seek to achieve their country in principle, but rather, only to revel in its cheap and gaudy symbolism as a means of feeling superior to others.

To them, love of country is about slapping a flag bumper sticker on your truck that says “these colors don’t run,” not working to make the country’s practice consistent with its promises.

They are the types who think patriotism is blasting Toby Keith’s lyrics about putting a “boot in your ass” because it’s the “American way,” and reciting the words to the pledge of allegiance before a sporting event. They care nothing for American ideals and care nothing about the Constitution, other than the part about guns. To them, America is like a football team, not a value system.

But what progressives understand and what those four congresswomen understand — the ones being attacked on the campaign trail with chants of “send them back” — is that true love of country demands criticism.

Those who love their nation fight for it to be what it claims to be, precisely because we believe it capable of the feat. If we didn’t, we wouldn’t bother.

Donald Trump is right: If we don’t like it, we can leave. The fact that we don’t — that we stay and struggle to attain our country — is the ultimate act of love.

It loves the likes of which Trump and his minions cannot understand because it goes beyond nationalistic bluster and mindless chants of “U.S.A., U.S.A,” and seeks to make real the blessings of liberty that are too often still unfulfilled.

It is the right that hates America and always has.

They are the ones who do not belong here and do not deserve the promises of democracy, because, at root, they have never believed in it.