Closing the browser window I had been cruising the Web with, I spun in my chair and with a sly smirk and a twinkle in my eye I looked to my travelling companion and asked, “Up for something different?”

I knew full well that she would be. We had arrived in Rome, via Venice, a few days earlier and having met up in Paris, we were both quickly tiring of urban sprawl. Our itinerary was penciled to take us to Naples, but I was restless about the decision. I had heard mixed things about the city and really wasn’t in the mood to roll the dice with another metropolis.

However, just south of our scheduled stop lay an area that numerous fellow travellers gushed was a “must see” while in Italy. A place called the Amalfi Coast; it wasn’t even clearly marked on my guide book’s map. But with “Amalfi” on our tongues and a sense of adventure in mind we headed to Termini Station, Rome’s locomotive port.

The closest we could get by train was a small industrial city, just south of Amalfi, called Salerno. I am traveling on a Eurail Pass (courtesy of RailEurope.com) so I wasn’t too concerned if the trip turned out a bust, as I would only be out the 8 euros for the reservation, but I could sense that Cathy, said companion, was a bit nervous heading into the unknown and paying top dollar for it.

But with few options, a good dose of wanderlust and a desire to get out of Rome we really didn’t have much to lose.

One nice thing about getting away from the city is that it is much easier to see the stars – and it was not in ours to have a simple time of things.

We arrived in Salerno at about 10 p.m. Slinging our packs to our backs; we hiked through the somewhat menacing night-time streets to the hostel I had jotted down in my overfull daytimer. Hope waned when the hostel’s sign was off, and died completely when the door was locked. Despite threats of “let’s just get a hotel room” from my travel mate [gasp!], we managed to get back to the train station and hop on the last bus to the town of Amalfi, guessing correctly that if we couldn’t find a room there at least we’d feel safer wandering around.

[Note to all travellers who are considering travelling about Italy, it is important, key really, to secure your bus ticket before you get on the bus, and before the ticket agents close.] So it was that we managed a free, compassion-given bus ride on the winding, cliff-gripping road to the coast side Italian jewel of Amalfi. 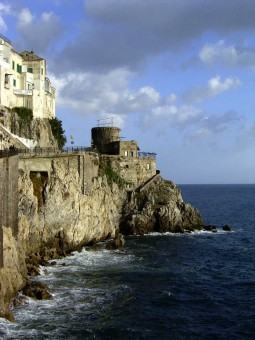 The fact that we had found Atrani proved only to be half the battle. The town is small, like one street small, but the houses are a series of maze-like apartments and back alleys.

We followed signs and eventually found what appeared to be the makings of a hostel, at least a room that had maps and laundry facilities – but it being after midnight, the lack of personnel made it hard to be certain. After wandering aimlessly through the “hostel” and me more than once whispering blushingly to my companion, “I think this is just someone’s house!” we struck gold by knocking on the right guest’s door. He sleepily informed us that there was in fact a phone by the front door to call the manager.

Picking up the phone, the conversation went something like this:

And so it was that we met Filepo, one of the best natured (especially for half past midnight) people I had met in Italy thus far. He came down, sleep still in his eyes, all smiles and showed us to our heavily negotiated room. It was excellent for our needs. After paying the same price for a dorm in Rome, we had managed to get what was essentially a private room.

After a night’s sleep we awoke eager to see the town we had only explored in a veil of darkness the night before. When we winded our way back down to the main square we knew immediately that the headache of the previous night had been well worth it. 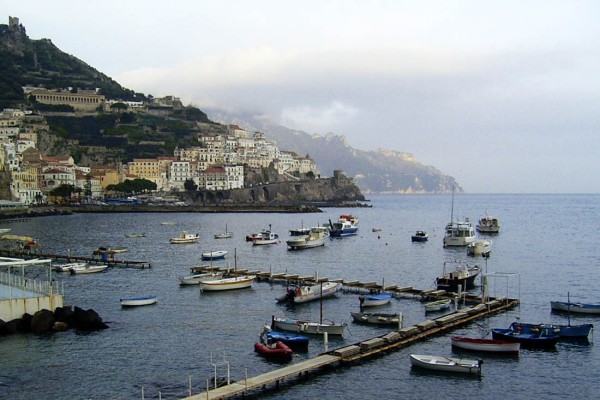 The town’s lifeblood, the marina, is the source of many a local’s income and many a tourist’s feast.

Cathy summed it up best by exclaiming, “It’s just like those travel shows I’ve seen on Italy. It’s stunning!” And she was right, the place was absolutely beautiful.

We spent the next three days lounging in our new found paradise and sopping up every relaxing minute of it. I’m one of those annoying Southern Ontarians that complains about the cold in the winter and the humidity in the summer – but January in Amalfi is the temperature I’ve been searching for.

A summer tourist town, the off-season pretty much left the place to the locals and ourselves, which was fine by us. It was warm enough to walk around in a t-shirt by day, but just cool enough to get comfy in a sweater after sunset. And what beautiful sunsets they were.

We discovered a bar at the far side of Amalfi called Willy’s Pub. It is run, appropriately enough, by a Mancunian named Willy. Though not busy, it was nice to get a reasonably priced pint and watch a bit of English TV. Willy was great as well, giving us some advice on places to see and even letting me live out my (albeit secret) dream of playing DJ in a bar. He also let us know that he runs a hostel in town as well – and I’m sure if I ever return to the coast, which I’m certain I will, that would be the place I’d stay. In fact, last I saw Cathy, she was heading there. 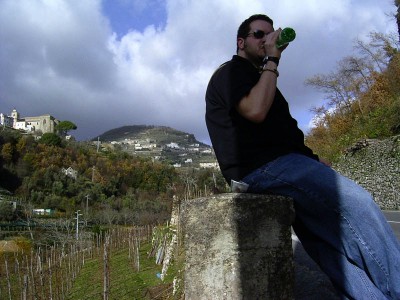 I stop to hydrate on my journey down from Ravello.

Though we were just up for some R&R – reading a good book on the benches that view out on the gentle waves of the Tyrrhenian Sea and shopping in the local market – I understand that most vacationers would not centre a trip on such a time. And I don’t want to give the impression that is all Amalfi is about.

From Amalfi you can take ferries all over the coast, as well as to the comely island of Capri. And if the beaches get weary, it is also only a 3.50 euro bus trip to Naples, the place where the pizza was invented. Naples sits in the shadow of Mount Vesuvius, and can play base to a number of day trips to the historic sites of Pompeii and Herculaneum.

I would also recommend that any visitors to Amalfi shell out the euro and take the bus up to Ravello. Perched on top of the cliffs that cuddle Atrani, the small town gives a spectacular panoramic view of the coast and offers some of the most scenic hiking in the country.

Having gotten the skinny on the hike from a patron of Willy’s the night before, I decided it would be an excellent way to spend my final day on the coast.

A quick trip to the supermarcato for some bottled hydration and a dizzying bus ride up the heavily jackknifed road to Ravello and I was rewarded with the most amazing view. I bought a “Passeggiate Walks” map from the Ravello tourist info office, and following the well outlined “suggested” trails, I hiked down into the valley that’s mouth hosts Atrani. 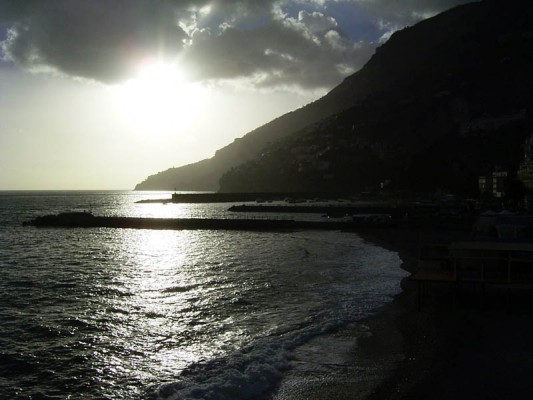 Though the cliffs hide the sun’s final decent, there are few things as tranquil as the constant crash of the waves and gentle brush of sea breeze.

Instead of returning to the town, I gauged my energy and chose instead to increase my hike and trek up the other side to the quaint village of Pontone. From here I walked down about 1,000 steps, through lemon groves, into Amalfi. It was the best 2 Euros I have ever spent – and a great way to soak up my last day on the coast.

That night, after a few well-earned Italian beers at Willy’s, I walked out and looked down upon Amalfi’s moonlit marina, and for the first time in my nearly three months of travelling I was truly sad to move on. My only consolation is that it left such an impression I have no choice but to return. Somewhere between stepping off that late night bus and when the moon over Amalfi hit my eye, it was amore.