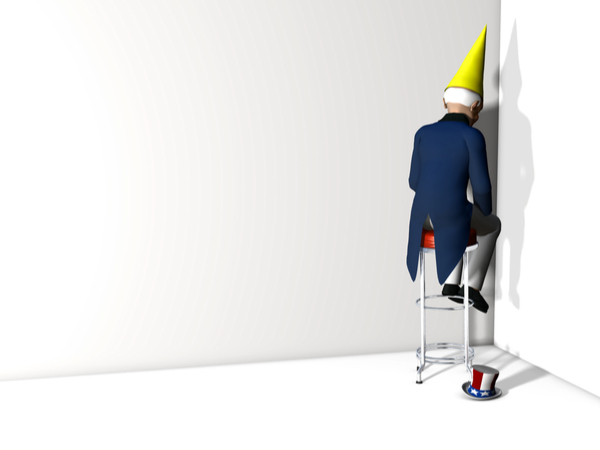 We should change our name. I’m not exactly sure how to do that but I imagine there’s an office somewhere in Washington DC for it, on a hidden cobblestone street that looks like Philadelphia in the late 1700’s, a large oak desk with an old man behind it, his wig and suit dusty and cobweb-covered. We chose a name that might have suited us at the time, but it certainly doesn’t anymore.

What suits us better as a nation today is The Confederacy of Capitalists, because United implies that we are actually working together, or at the very least listening to each other in an effort to remain together and that certainly is not happening right now and it feels likely it won’t ever happen again.

We’re broken. The divide between sides has become a chasm that is now too wide to be bridged. Imagine trying to put a bridge over the widest part of the Grand Canyon and there are two different companies on two different sides of the canyon that have to build it at the same exact time. Trouble is, the two companies hate each other and refuse to communicate properly.

Each company starts construction, unaware of what the other one is doing, only looking from the other side to see what it is their counterpart could be doing wrong. Then they ridicule, obsessively, so that they’re spending way too much time sneering and taunting and not enough time building. The project stalls out and the two sides never come together.

What was once amalgamation is now in detonation. The blame game continues as fingers point so hard, they fall off, now just a sea of fingers pointing in every direction. The truth is that we are all culpable. We’ve done this to ourselves.

We have collectively worshiped money to the point of putting a businessman in charge of our country, a man known for his irrational behavior and television personality, not a humanitarian. But maybe it has always been this way and it was just a matter of time that it caught up with us, our brashness spun out of control into a punchy bravado, our love for ourselves and not one another.

Throw the blame in any direction that is desired, but it’s not going to change the outcome; we’re failing.

The Roman Empire lasted one thousand years and the Shang Dynasty six hundred, but they eventually succumbed to outside pressure, a collapse from outside in. America has been around almost two hundred and fifty and we have started to cannibalize ourselves with greed, a collapse from the inside out.

We’re Pizza the Hut from Space Balls, locking ourselves in our fancy limousine and eating ourselves greedily, forever hungry for more, never satisfied, even when our guts can’t fit through the door. We simply knock down the door and start again. How long did we think this plan was going to last?

Karl Marx said that the seeds of destruction were already planted with capitalism, that the working class would rise up and take over, a violent revolution that would see the return of wealth to the many instead of the few. We can’t be far off, having more billionaires than ever before, a number that has grown exponentially in the last thirty years. In 1990, there were ninety-nine, today there are over five hundred, just in this country alone.

But what Marx failed to recognize was the strange admiration and worship that’s developed from the Proletariats, a developed incessance to become Bourgeoisie, an obsession to the point of defending decisions that could themselves at risk of death. We have, in short, developed a psychological allegiance with our captors, prepotency supplanted by irrational intimacy.

We should change our name. I’m not completely sold on The Confederacy of Capitalists, but I do think it has a nice ring to it. Maybe it could just be “The States”, because United is no longer viable.