No let-up on the pace today; Well a little let up, at least the time for a chlorine-starved swimmer to crash an elegant, penthouse hotel pool in downtown. Never travel without goggles, is my traveller’s rule of thumb. 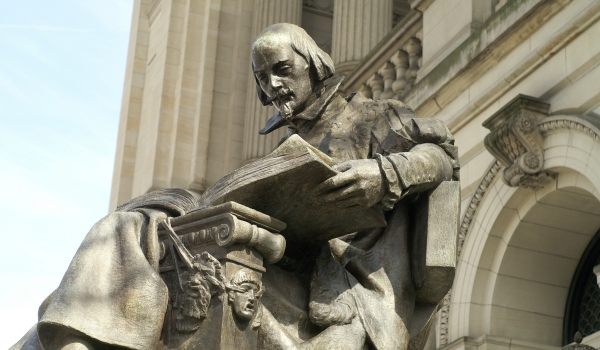 No let-up on the pace today; well a little let up, at least the time for a chlorine-starved swimmer to crash an elegant, penthouse hotel pool in Downtown. Never travel without goggles, is my traveller’s rule of thumb.

After a morning of meetings, it was over to Meisei University, out to the West of Tokyo. Meisei is a private university, notable for the Shakespearean vision of its President who, from the 1970s, made dealers Bernard Quaritch’s heart sing by systematically buying up a series of First Folios – not to mention F2, F3, and F4s. Today, their English faculty had kindly arranged for me to have access to their bank vault of a reading room (totally ‘Goldfinger’) – having first scrubbed up (am quite a fan of mandatory handwashing, in Reading Room, and indeed wider, contexts), and apply my mask.

And so, feeling like Sir Laurence Olivier in Marathon Man, I set to examining their collection of 12 F1s – including annotated copies, one that had belonged to the Restoration playwright Congreve, and one through which a bullet had passed, at least as far as Titus Andronicus). As if that wasn’t enough, we were taken to their student theatre – only an exact replica of the Globe.

The imagination and single-mindedness involved in building up such a collection from scratch, and building such a theatre, are stunning. But, like other collections, they’re keenly aware of the need to enhance what is (I think they’d be the first to admit) necessarily limited access to the Folios. And so a programme of digitisation of the annotations is underway – external funding dependent, I was (in a funny way) pleased to hear. Even Meisei are reliant on external grants for this kind of work nowadays.

Having proved the trustworthiness of Meisei students on the Monorail back to the centre (did I mention they have a MONORAIL! Which is as brilliant as you’d hope) by unwittingly dropping a 10,000 yen bill on the floor – returned within seconds – I went for an early evening meeting with Martyn Naylor, MBE, Chairman of the preeminent theatre agents in this territory. And when you realise this territory includes S. Korea, China, as well as Japan, that’s an awful lot of audience.

Among many accomplishments, Martyn introduced Yasmina Reza’s work (‘Art’) to anglophone audiences, and he told great stories about his discovery of ‘Art’, Gnl Douglas MacArthur popping round to check he’d done the dishes when he was growing up, and I think Sean Connery featured somewhere too. He is good friends with Gordon Dickerson, the agent of the John Osborne estate, with whom we worked a year or so back to bring to performance two early Osborne plays I found in the British Library, and Martyn is over soon to check out the revival of one of those plays, The Devil Inside Him, at the White Bear in May. He also talked movingly about the reaction to the Disasters last year, and the way it has impacted on live theatre, and more generally, attitudes towards going out in the evening.

Tomorrow’s a big day – an unexpected public viewing of the Holmes manuscript, arranged due to public demand, an HE conference addressed by the Perm Sec at BIS (explaining more about recent HE policy in the UK), and capped by an exclusive Ambassador’s dinner. I’m looking forward to the Ferrero Rochers.